Congratulations to us! My husband and I won the Halloween costume contest at our local swing dance organization's Halloween dance last night! 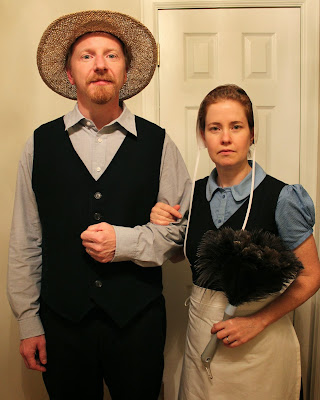 My philosophy about Halloween: I don't like it. I resent that the sweet and spooky low-key holiday of my childhood memory has somehow morphed into today's decadent, wasteful and entirely over-sexualized week-long season of adult bad behavior.

So I had to submit to the will of the genius who is my husband when he suggested that we dress as an Amish couple for our local swing dance Halloween party ("Amish people swing dancing would look really funny"). The only thing that was purchased for this costume was the feather duster. No, I did not have one--what do you think I am, an Amish matron?

New pieces sewn for the costume include my husband's vest, New Look 6659, my cap and my very simple apron. My black linen dress is Simplicity 2247 (another version in rayon challis) and the blouse is this Burda 7831 blouse, dyed blue for the occasion.

More on the blue-ification of the blouse: although I haven't done very much dyeing of any kind, all of what I have done has been using RIT dye. Several years ago I bought a whole box of Procion dyes at a yard sale (for $4, what a find), but somehow had been too intimidated by the process to use them. Salt! Washing Soda! Multiple settings of a timer! But somehow it seemed contrary to the thrifty spirit of the Amish to buy a new package of dye when I had so much on hand. Guided by instructions from Dharma Trading (link to their method) and Asheville's Earth Guild (link to their method), I used two teaspoons of navy and one teaspoon of aquamarine dye and was so pleased with the color--it was just what I had in mind. This fabric has some synthetic content to it, though I'm not sure how much. Procion dyes are for natural fibers, but there must have been enough natural stuff in there for the color to fix to. 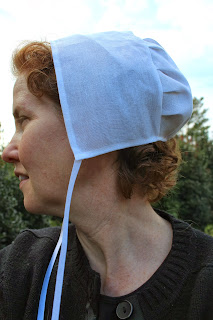 Sewing the prayer covering or cap was the part of the costume that required a little research and figuring. There are many, many styles of head covering used by women in different sects and locations throughout the so-called plain communities. I had this style in mind, but I wasn't sure how it was put together. Since I didn't allow myself enough time to order a pattern, I looked at a lot of pictures and also watched a couple of videos on YouTube. 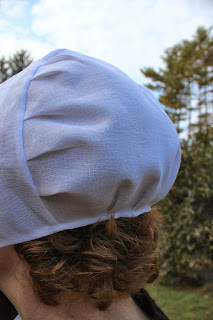 Fortunately I had some scraps of cotton organza on hand. This is a perfect fabric for the style, since it is crisp and holds its shape even without starching.

I learned that this style of cap is made from a good-sized circle (10" to 12" in diameter) with one edge sliced off. The band portion is sized to reach from the bottom of the wearer's ear on one side to the other. I just pinned the pleats in place and tried the cap on to determine their arrangement.

Now that I've made and worn one, I can see the practical appeal of wearing this style of cap: it certainly covers the hair and simplifies the process of getting oneself neat and presentable.


I kept asking my husband whether he would prefer to wear suspenders or a vest. And don't you know, he kept answering "A vest"?! Apparently my subtle repeated questioning was too subtle to suggest to him that buying suspenders would be a lot less trouble than making a vest.

But having a pattern cabinet full of out-of-print classic styles doesn't come without its pitfalls, and I had to concede (only to myself--he was blissfully unaware of the interior struggle) that making a vest would be easily possible. I had a wonderful wool-rayon double crepe on hand (previously destined to become a dress), which teamed up with a wrinkly, but cool, cotton voile as the lining. The vest front is fully interfaced with Pam Erny's fusible hair canvas. Since the Amish vests I saw did not have pockets or a back belt, I was happy to leave those details off this garment.

Though it is out of print, this pattern is highly recommendable as a basic lined vest with both men's and women's versions. The sizing was spot on (I made the large, which is listed as sizes 42 and 44). Men are so darned easy to fit!

I hope to eventually have some pictures of us at the dance--I'll post them if I get them. Even though I was the opposite of sexy (I didn't even wear makeup!), this costume was lots of fun to make and wear. We had never dressed up as a couple before, and I must admit that having a husband (or a wife) on one's arm was the perfect accessory for this costume.

Like many in the mainstream culture, I can't help but find the practices and dress of the plain communities fascinating. I worried a bit about whether wearing an Amish costume might be somehow disrespectful of these communities. A bit of online reading on the subject soothed my concerns, though of course I don't know how all Amish people would feel about my costume. Generally the consensus from my reading was that "English" wearing Amish dress is not offensive to the Amish as long as those wearing it are not engaging in profane or otherwise inappropriate behavior. Basically, the Amish are not super-worried about what we do and why we do it, which is consistent with their rejection of superfluous worldly concerns.

I hope the Amish would at least approve of my sewing skills!
Posted by Virginia at A Sewing Life at 7:58 AM 1 comment:

Mixed lace and knit pullovers are apparently very "on trend" just now. Generally I prefer to stay "off trend" if at all possible--and very successful I am at it, too. In this case, however, I suppose some combination of looking at Pinterest, reading sewing blogs and substitute teaching at the middle school has planted the notion of lacy casual clothes firmly in my mind.

Also popular at the moment are raglan sleeves (a no-no for the narrow of shoulder, but what the heck). Raglan sleeve patterns are thin on the ground in my pattern cabinet, but here's an out-of-print New Look pattern from the 90's, 6149. 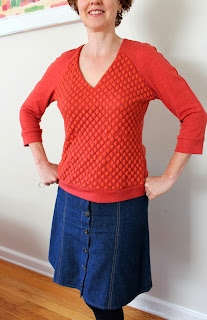 The wrap top in this pattern has gotten most of the attention on Pattern Review, but I didn't have enough fabric for it. From the three yards of this heathered orange 60" wide rayon-wool knit I had ordered from FabricMart, there was an irregularly-shaped approximately yard-sized piece left over after making up a sweater dress (yet to be photographed). I wanted to use the scraps from the dress project while the serger was still threaded in orange, which is not a daily occurrence.


The mesh dot knit lace also came from FabricMart in a different order. Interesting what a good match the two fabrics turned out to be. The front panel was cut from the solid knit and the mesh knit. The mesh layer was basted on top of the solid and the two fabrics were thereafter handled as one. 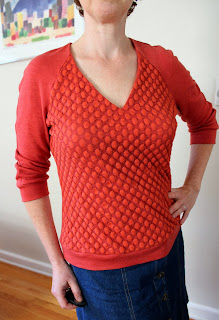 Lots of people delight in eliminating facings from their garments whenever possible, but I am not in their camp. I used the facing pieces included with the pattern because I wanted a clean, well-supported edge that would not require topstitching. Because the front panel has two layers, I slipstitched the facing in place by hand at the bottom of the V portion to the lower layer. The facing was also tacked in place at the shoulder and neck seam allowances. Now there is no possibility of it moving around or flipping out at all. 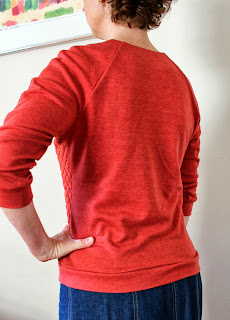 I cut a size 8 for the sleeves and for the neck and upper chest pieces of the shirt. Below the armhole I tapered out to a size 12. I shortened all the pieces 1/2" at the middle of the armscye, and I'm glad I did. Otherwise the batwing effect would have been more exaggerated, and the V would have been too low. Instead of a turned up hem, I used a two-inch band at the lower edge of the top and the sleeves, in imitation of the finishing on the mixed-media lace tops I saw on Pinterest.

It will be interesting to see how much I wear this top. It feels very slouchy and comfortable, and I think the orange color suits me better than a more typical sweatshirt color scheme would.
Posted by Virginia at A Sewing Life at 9:21 AM 6 comments: