Depending on your perspective, I made a very lucky or seriously unfortunate Craigslist discovery a few days ago. Two treadle tables (both broken in different ways), one Singer 27 (highly decrepit) and one pink Atlas straight stitch machine in a cabinet (with warped veneer). Total cost: $50. How could a person resist, right?

Apparently it was easy for most people to resist, because the machines went unsold for several days before I responded to the ad.

Treadle one has a broken-off leg on its cast iron base, a deteriorated top and six lovely (though very dusty and dank) ornate drawers.

Treadle two has a sound base, but a mostly missing top, two plain drawers and a center accessory drawer.

The Singer 27, a vibrating shuttle machine, is heavily corroded, but very pretty.

The pink Atlas is essentially in good condition, though certainly not pristine, but the wires leading to its motor were cut off just a couple of inches from the motor.

My first task was triage: what could be saved and what was trash? Tackling one of the sounder components of my "treasure", the base from treadle two, I thought about possible reuses. Garden table? Hall table? Laundry room folding table? 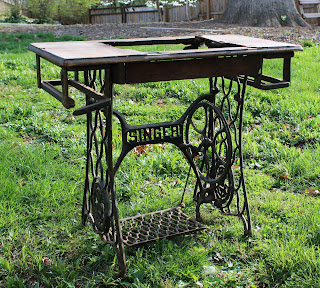 At the same time, I had a yen to copy Elizabeth's TV tray turned ironing table to set next to my machine. In its current incarnation, my sewing room is long and narrow and the ironing board is a good 15 feet from the machines. I notice a lot less pressing going on during project construction, and that is not a positive development.

The two strands of thought coalesced into my plan--use this base to make an ironing station!

I had everything needed for this project on hand. The board for the pressing surface was formerly a shelf out of an Ikea media center/bookcase thing. The main piece of furniture we sold on Craigslist last year, but apparently we shorted the buyer a shelf! We didn't realize it until quite a while later, by which time we had lost their contact information. At any rate, it's fine to use and abuse this shelf, which is otherwise a sad orphaned scrap of a thing. 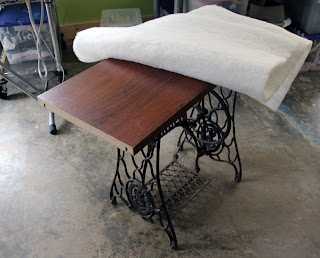 I covered the shelf with upholstery grade batting, which in the end seems a bit more lofty than would be ideal. A thick but not puffy batting or wool blanket would be perfect. I cut the batting several inches larger than my shelf all the way around and stapled it in place. 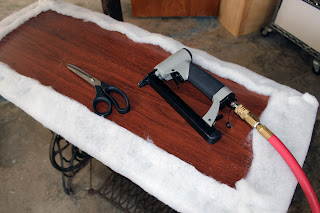 After doing the same with my outer fabric (which I noticed as I started this post is the exact same Denyse Schmidt Flea Market Fancy home dec print as Elizabeth used in her project!), I trimmed the excess batting and fabric close to the staples. 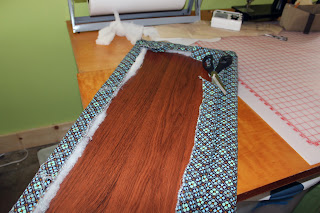 Originally it seemed as though that would be plenty good for an ironing board, but after I placed it on the base I felt I could still see a bit of the raw edges of the fabric and batting peeking out underneath, so I added a finishing piece of cloth to the underside. This would be the same as a dust cover on an upholstered piece of furniture. No dust cover fabric (technically called "cambric") being immediately at hand, I used a scrap of drapery lining. Any type of fabric would do. The edges are simply turned under and stapled into place. 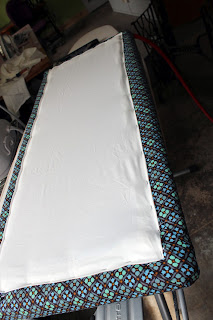 You may notice that I have a "real" staple gun connected to an air compressor. I fear it, but I fear crippling tendonitis of the wrists and arms more, and that's exactly what I get if I try to staple anything with a manual staple gun. I know everyone won't have access to this tool, but it surely does make projects like this go more smoothly.

At this point, the surface is complete except for drilling holes to attach it to the base. But I haven't done that yet. I do air compressors but, strangely, not drills.

After I set the surface in place, however, I started to wonder if I even want to screw it to the base. It's pretty stable, and if I can lift it off at will, there is another use I might put this treadle base to. More on that in an upcoming post. 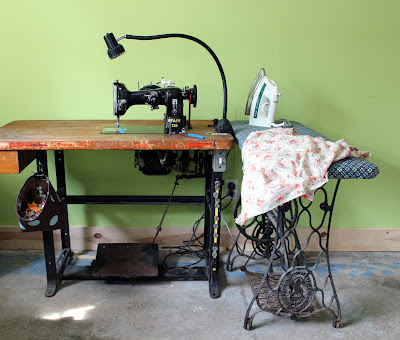 The finished ironing station! It is so handy. I love swiveling in my chair, pressing a small seam, and turning back to continue sewing. The free end is unexpectedly handy. I found I could slip the lower edge of the blouse I was hemming over the end and press up the hem very easily. Lining the underside of the board was the right decision, as there is nothing for the fabric to catch on underneath.

The wheels on this base roll freely, so the little table can be moved as needed.

Putting this old treadle base back to work in the sewing room is very exciting. Stay tuned for more projects with my Craigslist find!
Posted by Virginia at A Sewing Life at 8:12 AM