I knew in my bones this project would be a bust before I even ordered the fabric, before I even selected a pattern, before I even finalized the style. And why proceed in the face of that nearly-certain knowledge? Curiosity and cussedness is all I can figure. 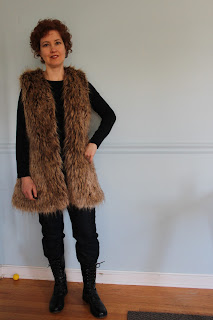 Strangely, though, the failure doesn't flow from my initial misgivings. Since last year I've admired the look of sleeveless furry vests. Even though I realized such a thing would not be practical, I like the whimsy and texture. I thought I could maybe benefit from a little whimsy and texture. Vests aren't much use to me generally, because I always need the warmth of sleeves. But, what the heck--I couldn't get the idea out of my mind and Fabric.com tempted me with a great sale on what looked to be a gorgeous fake fur.

The fur arrived and I adored the color of it. But it was seriously furry, so much so that I couldn't imagine what the effect would be when worn. On the one hand, I thought a short vest would be advisable, to limit the volume. On the other hand, that would put all the fur volume on top of my maximum area of volume and that didn't seem wise.

After much consultation with Pinterest, I decided to throw caution to the winds and to make a longer, princess-seamed vest. I returned to Simplicity 4032, a pattern used with great success in last year's fleece coat. 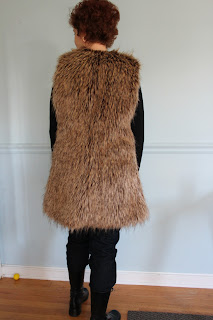 I worked hard on the construction of the vest. Internet research indicated that working with fake fur is one part sewing, two parts vacuuming. I disagree; it's at least three parts vacuuming. I used my hair clippers to remove the pile from the seam allowances before sewing them together, and I would highly recommend that approach. I stabilized the neck edge with a strip of the selvedge of the silk used for the lining. 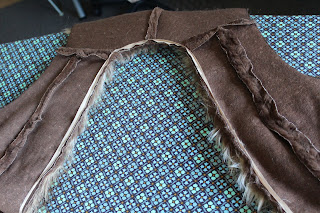 The lining itself is a gorgeous Marc Jacobs silk/cotton jacquard from FabricMart. 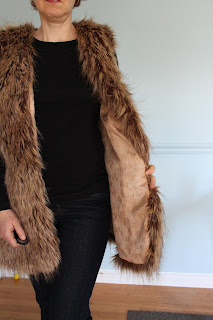 I was so worried this vest would be wildly unflattering. I don't think it is. It's not slimming, of course, and it is far outside of my usual look, but yet I find it cute and fun. 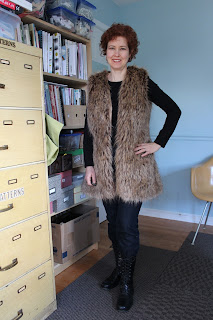 And yet I doubt I'll ever wear it, because the moment I put it on, my head swims from the petroleum-product fumes, my throat burns and my head starts to hurt. I truly did not notice this effect during sewing. I thought the fumes I was smelling were from the marker I had used to trace the pattern pieces onto the back side of the fur before cutting out. And I intended to trim off those edges after sewing it up, which I did.

But once this thing is on me, I am engulfed in a toxic cloud and I can't wait to get it off. It's also very ticklish around my neck and static-y, but I could live with that. The fumes, though--they won't fly. I have hung it in a faraway corner of the laundry room to see how a bit of time affects it, but I'm not very hopeful. The fabric has been laying out in the sewing room for over a month, so it may not off gas much more, at least not in this decade.

Posted by Virginia at A Sewing Life at 9:02 AM