I Really Go Around In This 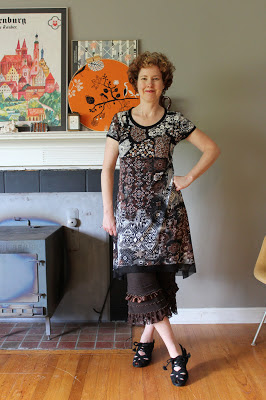 When I want to mess with my husband, I wear these ruffled leggings (adapted from Kwik Sew 3115). My mother, too, can't fathom why I would go out of my way to embrace the absurd. But strangers in the street can't stop complimenting them, and they perform a critical function with this dress: hiding the wrong side of the back hem.

Yes, now that the high-low hemline trend has been chugging along for some time (and must consequently be nearly over), I have jumped on board. It didn't occur to me that the white wrong side of this ITY knit would show from the front until I put the dress on for the first time. Very distracting. The bloomers totally eliminate the problem, and are ridiculously comfortable and fun at the same time. 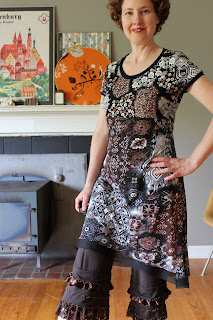 The dress is another version of New Look 6700. As usual, I took a lot of time to make something extremely simple. The big time waster was deciding how to use a cool black mesh knit as trim. In the end, I went with a strip of mesh at the hem and used the selvedge for the neck and sleeve edges. It's lucky that the selvedge worked so well, because folding the mesh in half (as in a typical neck binding) seemed like it would diminish its sheerness. I was concerned that a single layer of the mesh at the neckline would not hold up in wear, since the fabric doesn't have a lot of recovery. 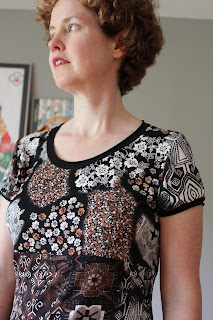 These two super-cheap brown and black ITY prints from FabricMart have made me think about the combination of those two colors. And I like it.

Posted by Virginia at A Sewing Life at 1:54 PM