Late summer in Asheville has involved lots of rain, a bored teenager and a good many sewing projects, not all successful.

Somehow I found myself working on three black garments, one after another! It was time for something more colorful, more photograph-able and more uplifting to close out my summer sewing. A comfortable knit dress to the rescue--Butterick 4788, an out of print Maggy London design.

I'm as influenced by all the cute striped projects I see on the blogs as the next person, but I don't seem to wear stripes as well as most. If there is too much contrast between the stripes, they overwhelm me. This low-contrast rayon knit stripe from FabricMart is a good compromise, especially since it features two of my favorite colors, coral pink and cocoa brown. 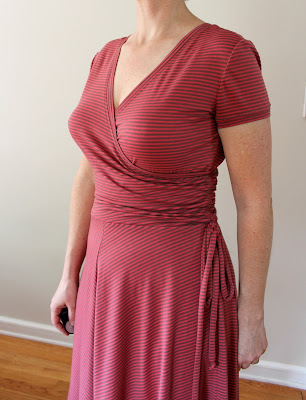 To play with the subtle stripe, I added a center front seam and cut the skirt panels on the bias for a chevron effect. The back skirt pattern piece features a center seam (conveniently and yet inexplicably), so I simply used it for all four skirt panels. I bound the neckline and sleeve edges with a band (rather than turning and topstitching as directed by the pattern), and I did not reduce the neck edge to compensate for this addition. I figured the band would raise the plunging neckline a tad. Also critical to a secure fit at the neckline was the length of the band. I measured the length of the neck edge (actually, neck edges--right and left, were measured and cut separately) and then cut the band to 80% of that length. If this fabric had lengthwise as well as widthwise stretch, I might have cut the stripes on the cross grain for the binding, but it did not so I did not!


Each bodice piece is cut separately, and each should be carefully marked to avoid confusion in sewing! Blue painter's tape works great for labeling. I followed the directions closely and all was well; if I had tried to go my own way with this, it would have been a frustrating experience.

Some sewers used clear elastic to create the ruching effect on the left side, but I followed Butterick's instructions for adding a casing using the side seam allowances and was pleased with the result. Clear elastic and I have not been working well together recently, and I liked the control I got by using a casing and regular 1/4" elastic. 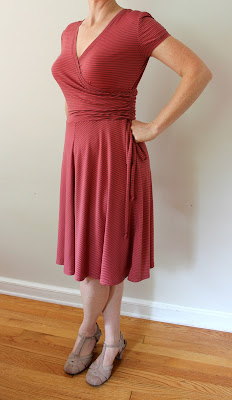 Notes on sizing: the several wrap knit dresses I have made this summer have convinced me that this style requires a tight fit at the bodice to avoid gaping. Though my measurements would have suggested a larger size and adjustments, I cut the size 8 with no changes and I am happy with the fit. Everything feels very secure--no shifting, gaping or flashing, even with the openness of the back neckline. I like the width of this skirt, too. It's graceful but not too full.

Even though there are many darling knit wrap dress patterns that are new to the market, I just couldn't see purchasing another when I have several in my pattern cabinet already. If you have this one, I can't think why it's not every bit as good as the latest model. 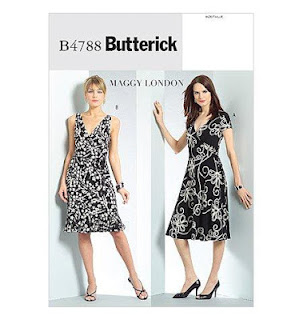 Posted by Virginia at A Sewing Life at 11:43 AM