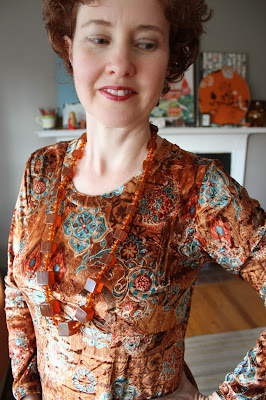 Jenny and Ethel: the great-great aunts who shaped and absolutely ruled my mother's family. To do justice to their stories will be another post, but for now I'll say that this amber necklace was bequeathed most particularly to me by Aunt Ethel, on account of how well it suited my coloring, in her expert opinion. Aunt Ethel was a dressmaker, a chicken farmer, a flower gardener, a tyrant. She was a handsome and stately woman who kept her long straight hair colored honey-blond and idiosyncratically arranged in Heidi braids coiled on top of her head far into her eighties.

This necklace came to her by way of her youngest niece, my Aunt Polly (now herself in her eighties), a souvenir of Polly's unusual visit to the Soviet Union in the early 1980s. The amber is a spectacular color, and has always been much admired in my family for its beauty and exotic provenance. I knew I was to receive this necklace from my teens, and even then I wondered when and how I could ever possibly wear it.

For I, unlike Aunt Ethel, am neither stately nor handsome. On a good day I am rounded and curly and petite and modestly pretty, but as I progress into middle age it is becoming ever clearer that I will never be queenly in the manner of my formidable great-great aunts. It's not easy for me to stand up to this necklace.

But I think I've finally got a dress that can serve as a foil for the amber! Another variation on the New Look 6700 t-shirt dress theme. 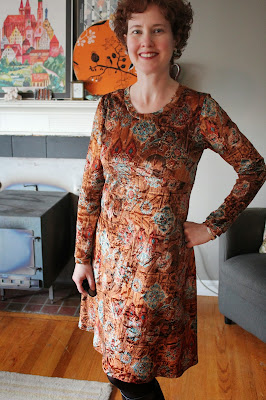 If you too are destined from birth to be flattered by amber tones, FabricMart Fabrics still has some of this poly stretch velvet! If only it were actually warm to wear, this would be a perfect fabric to me. I have big plans for a silk jersey full slip to wear under this and other poly dresses this winter, so I hope to overcome this issue.

For this version of this dress, I was smart enough to use a center back seam. I shortened the skirt a total of nearly two inches at the center back (using a combination of a wedge swayback adjustment and a further reduction at the waistline seam), and the fit in the back is greatly improved from last week's version of this same dress. Last week's dress attempted to use darts to remove the excess fabric at the swayback, but it turns out I needed to reduce the length at that area rather than the width. 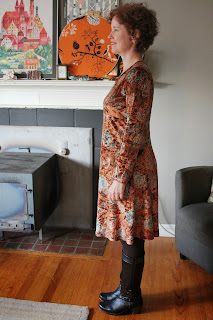 Originally I planned a high cowl or relaxed turtleneck finish for this dress, but it just didn't look right. The velvet did not drape nicely, so I removed the cowl and replaced it with a band. 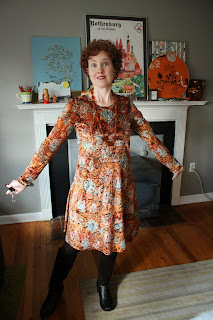 I'm super-duper happy with this dress. I've worn it comfortably all day, through cleaning and cooking and sewing and driving, and now I'm getting ready to take it out dancing tonight! Minus the necklace, though--that would be a real hazard flying around!
Posted by Virginia at A Sewing Life at 2:36 PM