Blouse with Embellished Collar: Because Separates 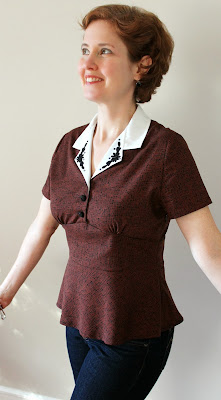 There's a downside to everything, even such a nice thing as loving to wear and make dresses. It's hard to make separates, even when I know I need, want and will wear them. Making a blouse like this is exactly as much work as making a dress and at the end of it, only half of my body is covered!

But: pants. In the winter I do like to wear them. Even for dancing. And mixing things up with jeans from time to time helps me feel just a little less matronly. So. I should do this. I should make more separates. 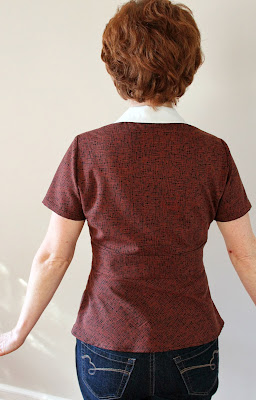 Vogue 1573 had its second outing here, this time as a variation on view B (version 1, the black lace dress, here). See the spread collar with facing? I wanted that. See the shoulder gathers? I didn't want those. 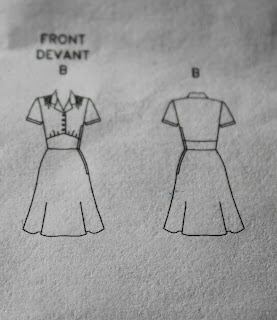 Below is the altered front pattern piece showing four things: 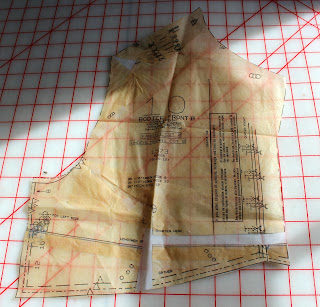 My point here (yes, there is one) is to say that I was nervous about reducing the shoulder width so much (1 7/8" on the front). The back shoulder width was narrowed to match. Wonder of wonders, it all worked out. I feel very empowered to know that I can make both fitting and style adjustments with success. 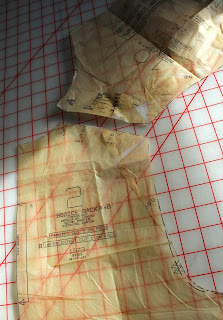 This rayon challis from FabricMart appealed to me for the combination of a color that works well for me (rust) with one that doesn't (black). I thought that the two together, plus the geometric design, would be useful for pairing with black separates. But then as I was envisioning this top, it seemed rather dark and gloomy. I admire vintage blouses and dresses with white collars, which play such a good trick of directing the eye to the wearer's face. 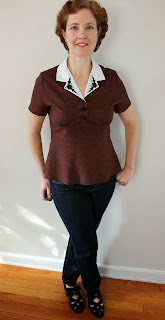 The plain white collar, though, was too stark against the fashion fabric. It put me a bit in mind of a bowling shirt or a waitress uniform. I started playing around with this vintage black cotton trim and loved the way it related the collar to the rest of the garment and especially the buttons.

And then I decided it needed rhinestones, which I have never, never used or even considered using before. Off to Hancock's, which didn't have what I wanted, and then to A.C. Moore, which did. 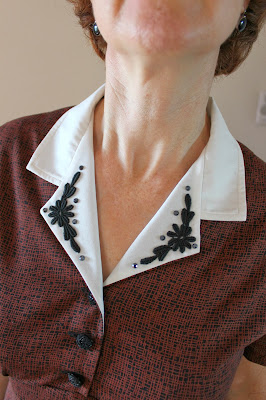 Since neither store I visited had a heat set tool that looked sturdy, I simply applied these stones with adhesive. If they come loose during washing, I'll just glue them back on. I have lots more. A heat set tool might be in my future, though--let me know if you have any suggestions! 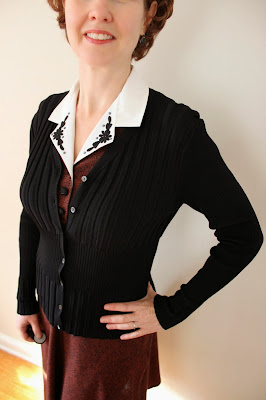 Paired with a beloved Ann Taylor black rayon cardigan. Yes, I did make a matching skirt, but I don't like either the skirt or any of the pictures of the two pieces together. After the holidays, I hope to make the skirt work better (mostly, it's just too big).

This dress pattern, made as a blouse, combines two things that I need in a top: a collar and a defined waist. I'd like to think I will make a bunch more, but it isn't a quickie garment. We'll see.
Posted by Virginia at A Sewing Life at 8:57 AM