Adjusting the Sweetheart Neckline for a Narrow Chest

I promised you the lowdown on how I solved my sweetheart neckline problems for my Sew for Victory dress. As I've mulled over how to explain my process, I have been seized with anxiety on two fronts: first, can I explain what I did clearly enough and second, will my adjustments work for someone else? So I present my notes with this caveat: I hope they will be helpful, but I can't claim the backing of a sewing authority for this approach.

On the other hand, I've tried the approaches suggested by the sewing authorities for this problem, and they didn't work for me!

First, here is what I am thinking of when I say "sweetheart neckline" for the purposes of this discussion: 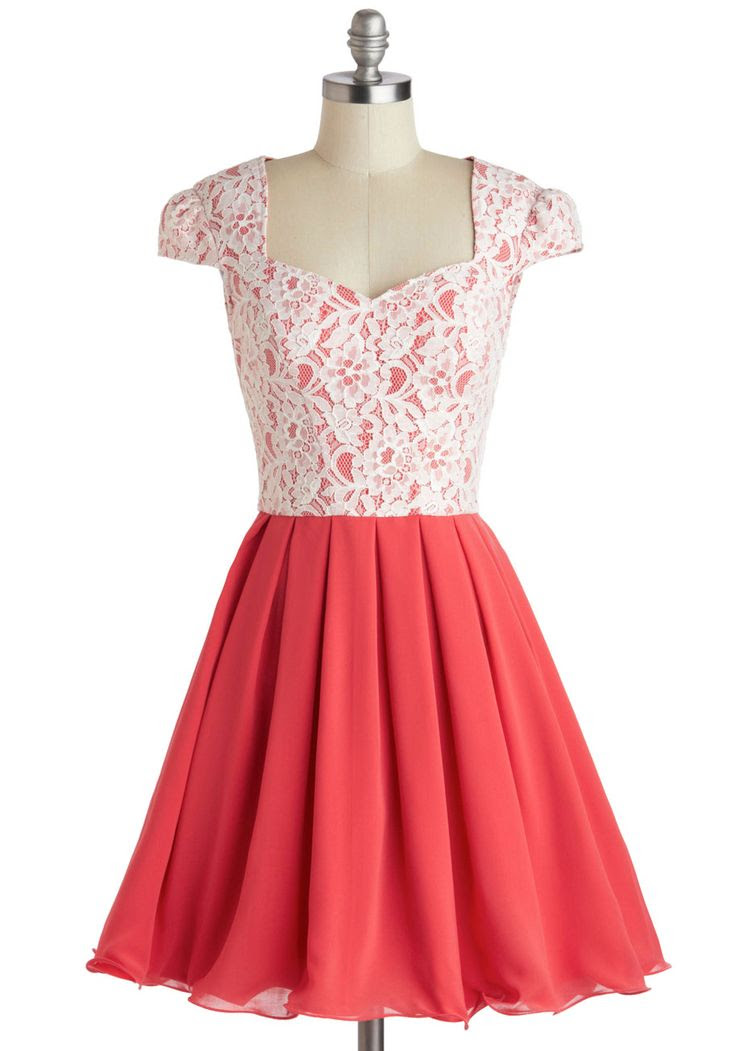 Whether the bodice is shaped by princess seams or darts, the "sweetheart" neckline shape is one that comes to a slight point at the center front and then opens out to the sides. The designers of the 1940's favored a much more demure opening than we see on modern versions of this neckline.

Because I am narrow from armpit to armpit (12" at the most), the opening on the modern sweethearts is just too wide for me. By comparison, most patterns seem to be assuming an armpit to armpit measurement of 13" to 13 1/2" in size 8. With a garment chest measurement that is 1" to 1 1/2" wider than my chest, an open neckline exposes my bra straps, gapes and falls off my shoulders. I have the same problem in RTW. I would never try to buy a dress like the lace and pink one above, because I know that there is no way that it would fit and no way that it could be altered to fit. Even a size 0 or size 2 would be too wide in the upper chest and comically small everywhere else.

Square necklines and wide scoops present similar problems, but they don't appeal to me as much. Also, these shapes are easier to adjust at the pattern alteration stage because we don't have to try to preserve that nice curving point in the center.

The usual fitting advice for "narrow shoulders" is to reduce the shoulder width by taking in at the armhole, but this just makes the shoulder section tiny and pulls it outward, giving it nothing to hold on to and no power to cover my bra.

Working up the resolve to counter this problem was a challenge. Even though I am drawn over and over again to sweetheart necklines, I have at least two painful failures in my past:

So I did the right thing and made a muslin of the change I had in mind.

May I present...the world's ugliest fabric? It was part of a free bundle from FabricMart. It's actually quite cool how the print frames the neckline, but overall it looks hideous on me. I cut the peplum on the bias to try to encourage a little drape, but the quilting cotton is so stiff that using the bias made little difference. 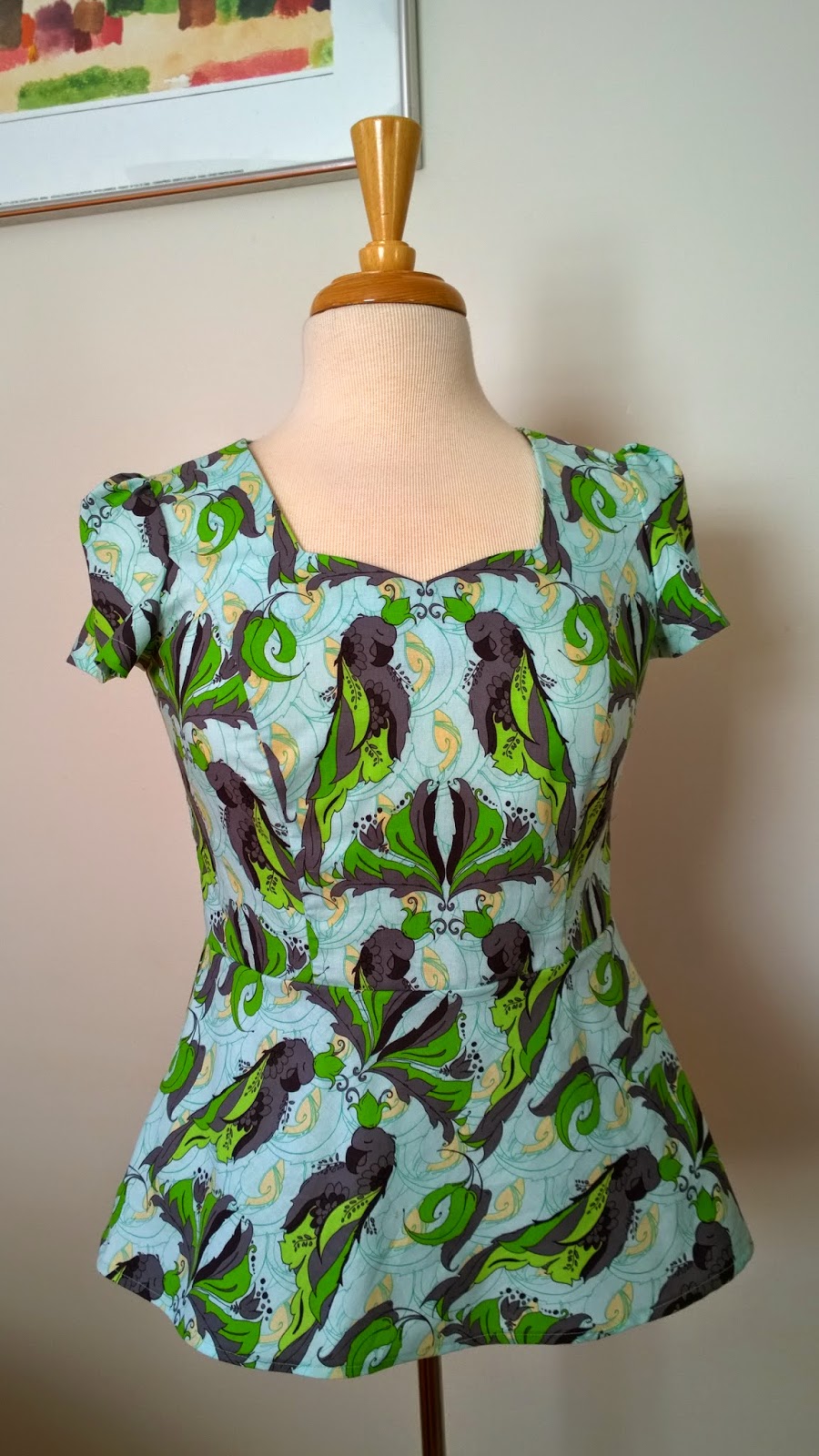 The important point here is that this line cannot go through the center front fold, as it changes the angle of the seam it terminates in. For the moment, ignore the white wedge opening toward the shoulder above. You might also notice that I've marked a 3/8" seam allowance at the princess seam. I trimmed away 1/4" from the standard 5/8" allowance after I had made all my pattern changes. It is possible to sew a princess seam without first staystitching or notching if the seam allowance is 3/8", but not if it is 5/8". 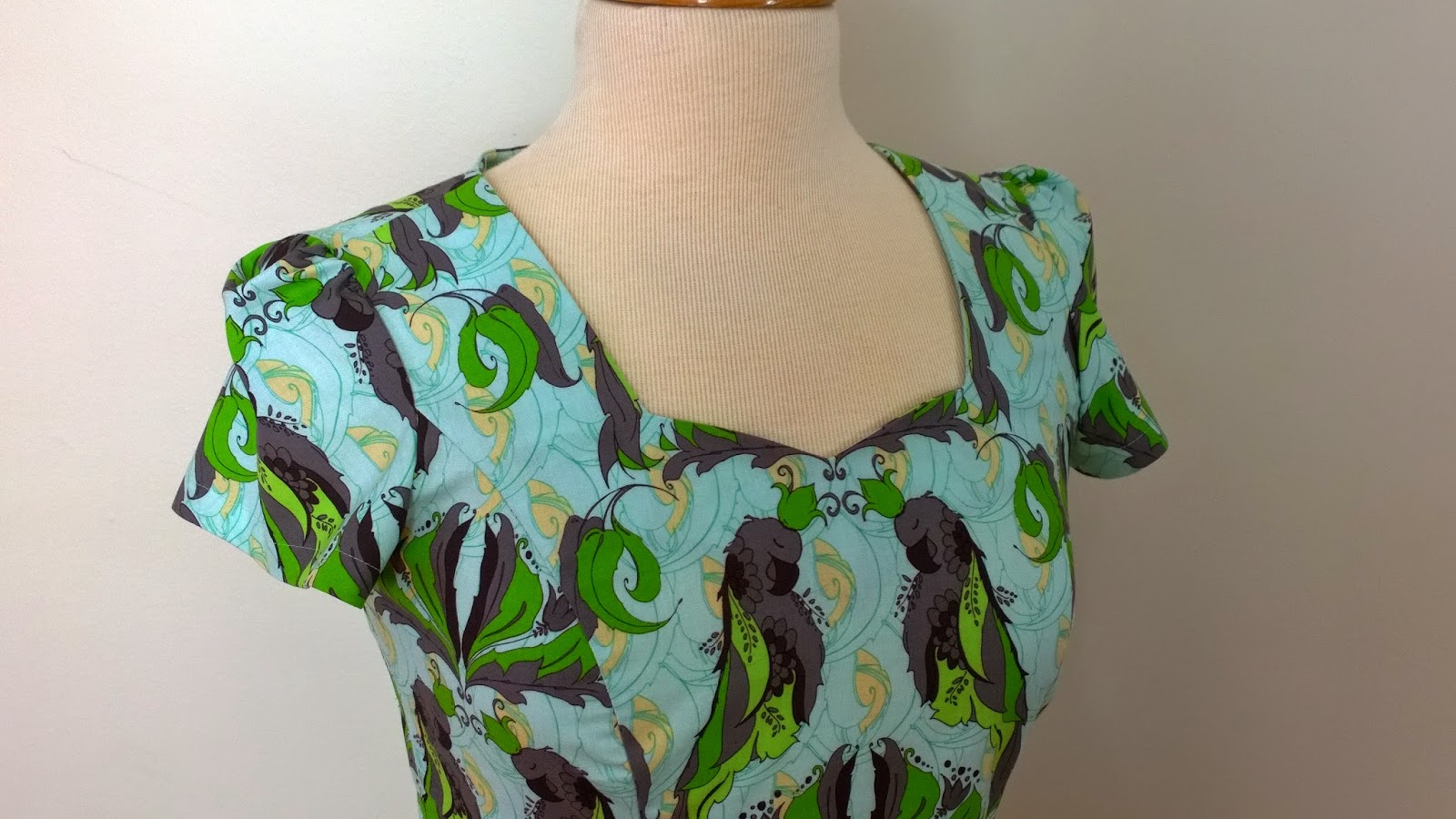 You might wonder why I couldn't just remove this width all the way down the center front fold. I could do that, but then the point of the V would be higher and I would have that much less room at the waist as well (which is the opposite of what I actually need at the waist).

So, this wedge-removing alteration took care of the gaping but resulted, again, in binding at the armhole!! It finally struck me: I need to reduce the width right where I am extremely narrow, and then add it back in again toward the top of the shoulder line. My shoulders are narrow side to side but at least normally deep from front to back, and narrowing the upper chest was also removing all my ability to move my arms. 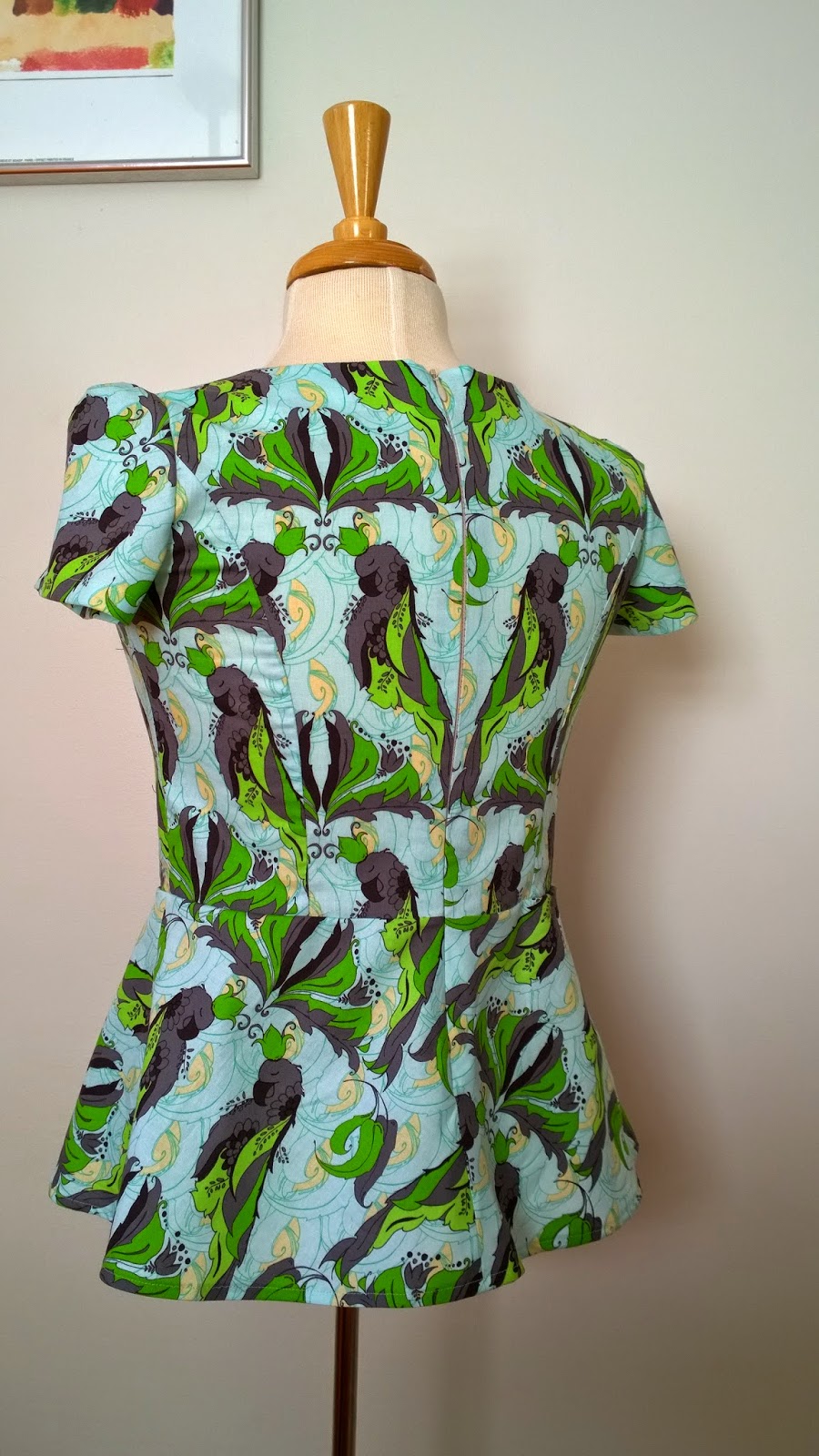 Before we move on, I should point out that I made the same adjustment to the center back pattern pieces as to the center front (removed a 3/4" wedge tapering to the princess seam). Because this alteration goes through the neckline and does not reduce the actual length of the shoulder seam, I didn't necessarily have to do the same thing on the back as on the front, but I happen to know I need to narrow the back as well as the front.

Thus, the breakthrough was to do the opposite alteration at the shoulder line as I had done at the neckline: draw a line to the princess seam from the shoulder seam and then spread it 1/2". 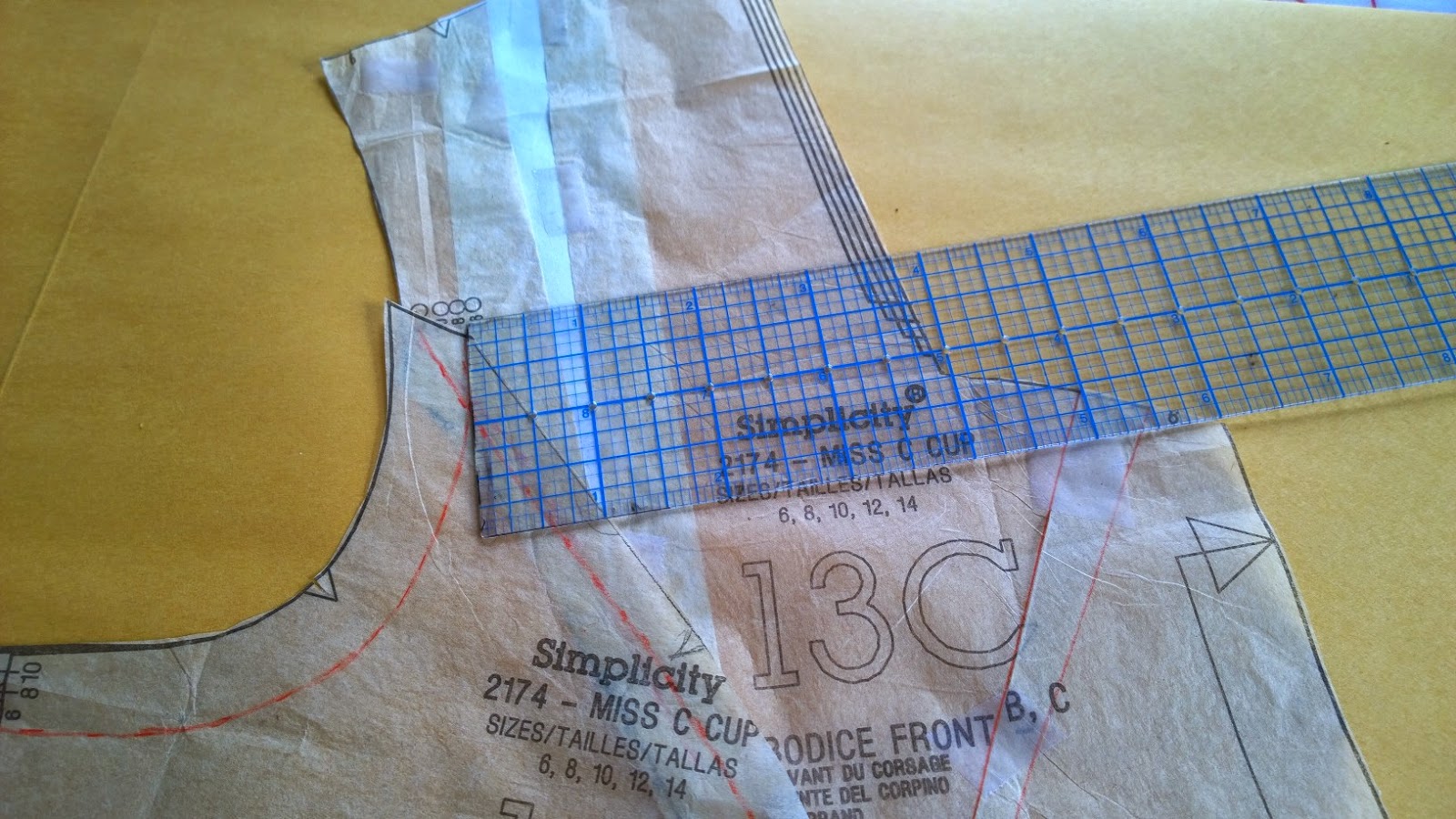 Above you see the added wedge at the shoulder, and you also seen that I have overlaid the side front pattern piece onto the center front piece. I drew the armhole seam line in red so that you can see how the measurement from the center front to the bottom of the armhole  (as if you were looking at me straight on, and saw me from armhole to armhole) is 6", or 12" total from side to side. Depending on exactly where I measure, the dimension might be a little more, but the point is that I have narrowed the center but replaced that width at the top of the armhole to allow for arm movement.

Another benefit for me of this alteration is that it places the princess seams over my bust apexes rather than out to the sides. 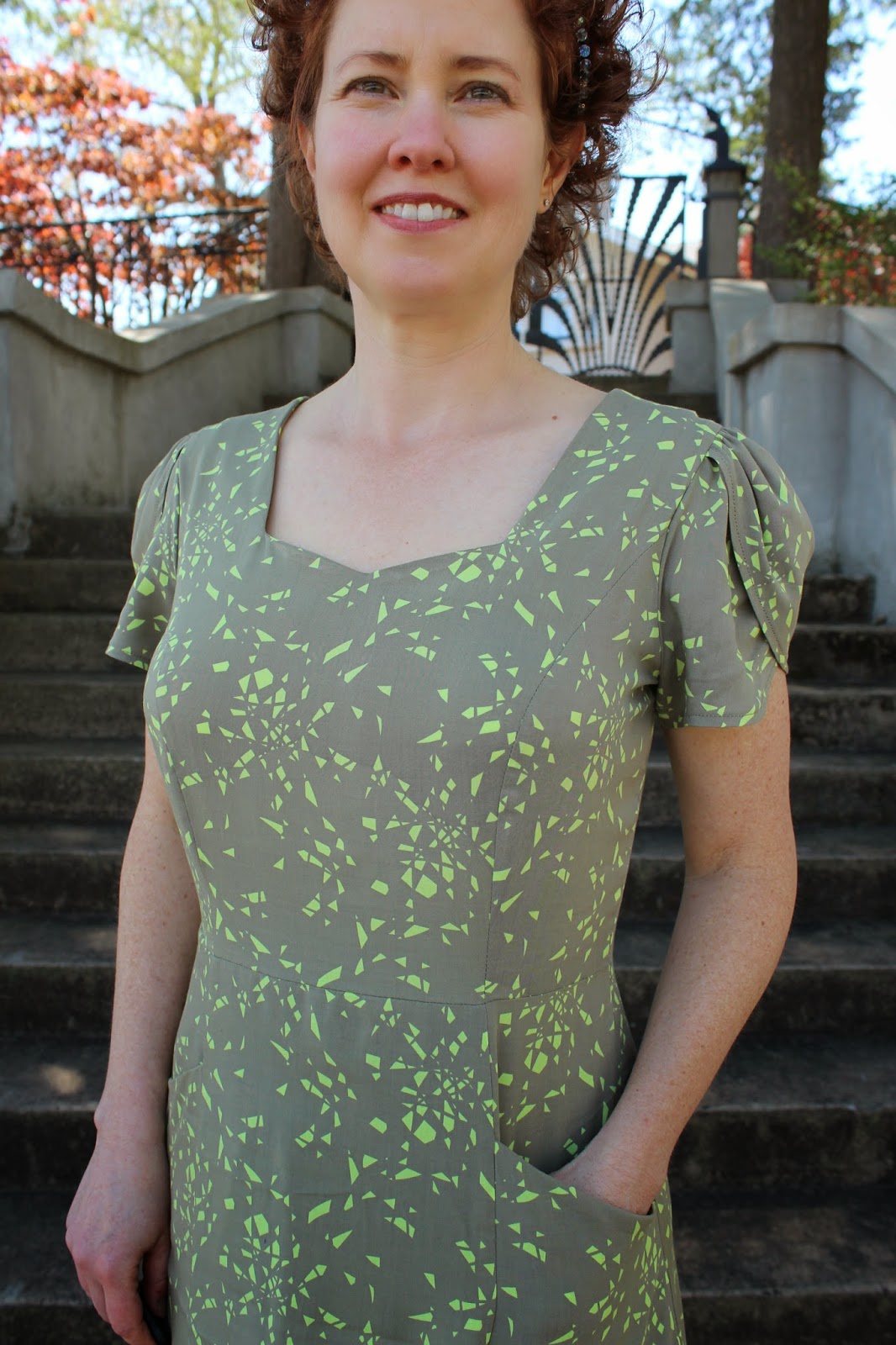 Of course I had to make the same change to the back pattern piece at the shoulder line, since now the shoulder seam had grown longer in the front, and of course I also had to alter the neckline facings to work with my changes. To alter the facings, just lay them over the pattern pieces and, in this case, cut off the excess at the appropriate angle. The facings are only involved with the shape of the neckline, so the changes at the shoulder seam did not affect them.

Next time I feel like expanding on this progress, I might take on an even wider sweetheart neckline to see how much openness I can preserve while still staying covered and managing to move my arms. But for now I am happy with one sweetheart neckline pattern that finally fits.
Posted by Virginia at A Sewing Life at 7:23 AM