Apparently, someone didn't get the memo that wrap dresses and border prints have had their moment, and it has passed. 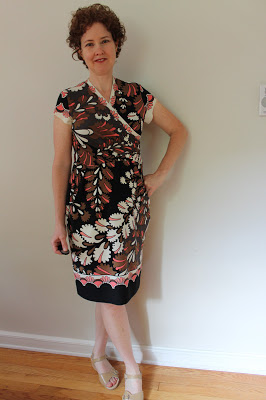 In my defense, though, this fabric was very inexpensive from FabricMart (it's a polyester ITY knit), and it has lots of good colors in it. I particularly like the touches of coral.

As to the pattern, I needed something with a straight-ish skirt to make use of the border around the bottom. So, again with the New Look 6097. 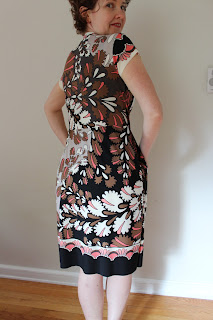 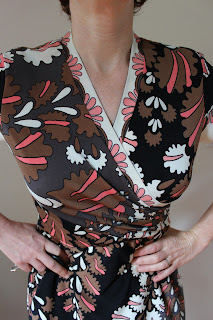 To use a bit of border for the neck binding, I had to cut on the straight grain rather than the crosswise grain. Since the straight grain has a lot less stretch, the neck binding feels a little tight and it draws in the neckline just a bit too much. I also should have trimmed 5/8" or so from the neck edges prior to adding the binding to accommodate the binding's width (since the pattern is designed for a folded-over facing). I knew that, but yet I didn't do it. Why? Not sure--maybe I was worried that it would end up showing too much bosom if I trimmed it (which makes no sense, but it's a potent fear). Even though it could be "perfecter", I do like that brighter bit of the fabric up around the face, and there's certainly no danger of showing any cleavage.
Posted by Virginia at A Sewing Life at 3:00 AM