So, this is one of those blast-from-the-past, long-completed-but-never-blogged projects. I was thinking about this dress as I was making a whole new thing, a mashup of the Colette Ceylon, Colette Parfait and McCall's 6503. I'll be posting about that dress soon--it came out a treat! 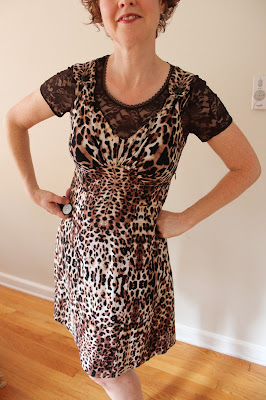 Anyhoo, in considering skirt possibilities for the most recent dress, I remembered how nice I thought the six-gored skirt from the Parfait was. Which made me think of the Parfait and how much I like it and how I'd never blogged about the dress (though I did show a pair of overalls with the Parfait bodice) and why exactly that was. Ah yes--because I had never been completely happy with the shoulder straps and wanted to fix them before posting about the dress.

Which led to me working on those straps. And now they are better but not perfect still. I have very very narrow shoulders and the little buggers were forever sliding down (despite my already having shortened them several inches at the pattern alteration stage). With this round of alterations I unpicked the back neckline and moved the straps a bit closer to the center back. Moving them even closer together turned out to show my bra straps, so that was out. I also shortened the straps another 1 1/2".

The result? Now the straps don't slip or slide one bit, but the back waistline is pulling upwards. If it isn't one thing it's another. If I were in the process of making this bodice again right now, I'd apply my brain to the question of how to fix both problems but, since I'm not, I'm just glad the straps stay up! 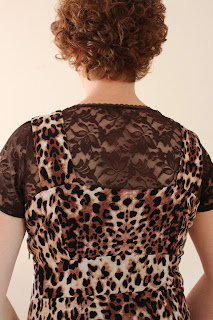 With the straps fixed, I remembered another problem. I don't much like wearing strappy dresses. This is not related to advancing age. Until a couple of years ago, I never ever wore sundresses. Now I do, but the occasions I feel comfortable with that much skin showing are few. Being so pale, wearing a sundress in the sun is asking for trouble. And at indoor events, there is usually sufficient air conditioning to make a strappy dress feel too cool, so I often end up adding a cardigan sweater. That looks cute, but it hides the sweet details of the dress.

I thought a lace tee might be a nice way to add some coverage, and I remembered a failed effort at a lace tank from earlier in the summer. Out it came. Sleeves were cut, edges were trimmed and a new, improved outfit emerged! The tank/tee originated with Kwik Sew 3740, but it got fairly banged around in the various iterations. Suffice it to say, any tee pattern would yield a similar result. 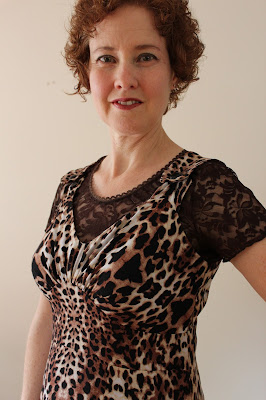 One thing I found interesting about making a lace tee: I worried a lot about seam finishes, and when I was trying to make this as a tank, I used french seams. When I took it out to turn it into a tee, I couldn't be bothered with French seams or with changing the thread on the serger, so I just sewed the seams on the sewing machine with a narrow zigzag. On the outside, I swear I can't see the difference between the French seam and the zigzag. With a more delicate lace there might be a difference, but in the future, I won't bother with the French seams unless there's a real need.

Other points about the Parfait: to deal with my very narrow upper chest, I used the size 0 at the top of the neckline and narrowed it yet another 1/2" per side. I tapered from the size 0 to size 4 by the waistline, and used the size four for the waistband downwards. The straps, and the problems therewith, we have already discussed at length.

Many sewers noted that the facings are pretty puny at the neckline, and I would not disagree. Fully lining the bodice would be a nicer way to go, but it does work as designed. Adding a little bit of double-sided fusible interfacing to hold the back facing down eliminated issues I had with that bit flipping out (and me not realizing it, since I couldn't see it!). 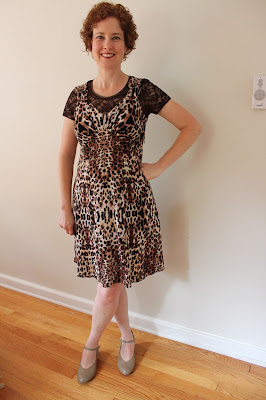 Actually, the most difficult part of making this dress was figuring out how to lay out the rayon challis animal print. I definitely did not want to cut it randomly, but rather I wanted the different parts of the print to line up and to be mirrored across the front and back of the dress. It took hours to think that through and cut each piece individually, but I was pretty thrilled about how it worked out in the end. I can never learn this lesson enough: almost every print needs careful layout and attention to look its best. Every time I think a print is totally random and cut it without planning how the motifs will line up, I am disappointed when I see the outcome in the mirror.
Posted by Virginia at A Sewing Life at 2:30 PM