Rosie the Riveter, by way of Colette Patterns

Not a new costume idea, but it combined three great advantages for me:
1. (Most important) I've been longing to make overalls!
2. World War II era
3. Comfortable and swing danceable

I sure did agonize over what pattern to use. The candidates included Folkwear's Rosie the Riveter

Of course there are many vintage patterns, but nothing that I found was just right (though I may keep looking for a coverall pattern).

Even though the straight waist of the Folkwear pattern would be more historically correct for the 1940s, I couldn't stop thinking that a pointed, 1930's style waist would be more flattering to me. So in that sense I was leaning toward the Decades of Style pattern, but I worried about fitting it, and about wrestling with those crossed straps during visits to the loo.

So, taking a deep breath, I decided to use the Colette Parfait, which I have made and carefully fitted in its "real" form as a dress (no photos of that one, unfortunately, but it came out great). 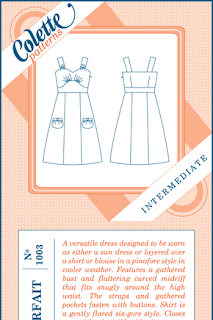 Conceptually, adding wide pants to the bodice wasn't a difficult matter, but I knew that it would take a little thinking. My steps were: 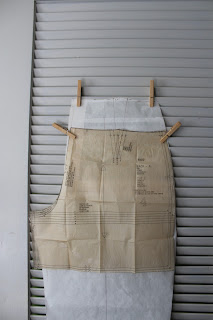 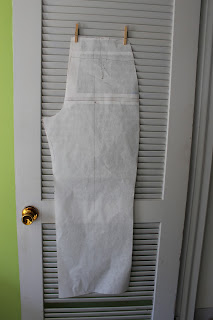 I knew from the book Pants for Real People that it would be better to make the crotch depth too short than too long (as it can be lengthened by stitching the crotch deeper, but not easily shortened), but even so I decided I needed to add another 1/2" to the crotch depth. In sewing, I further deepened the crotch by a full inch. That worked out very well; the crotch is neither baggy nor (ouch!) too short.

The order of sewing things together is much the same as it would be for the dress, except for the differences in constructing a side invisible zipper versus a centered back zipper. By the way, I did originally use an invisible zipper at the back (so that's definitely an option), but I decided to go for greater period authenticity as well as strength. 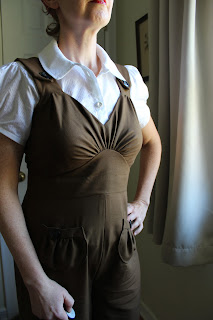 I was so thrilled to find what I consider the perfect fabric for this project at Waechter's Fine Fabrics, a local fabric store which also happens to do a booming internet trade. It's a substantial rayon gabardine, with a perfect drape for the wide legs of these pants. I'm not finding the brown color on their website, but the pretty bright blue shows you what it's all about. This fabric seems like something you might actually have found in the forties, though perhaps not for factory togs! 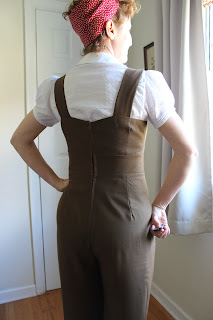 I had a piece of red quilting cotton with white polka dots that would have been fine for the head scarf, but I have two problems with using that type of cotton for a scarf. The reverse side is very definitely white and not nice looking, and it's bulky to tie. Wonder of wonders, I also had a silk dress from Ann Taylor via Goodwill in a lovely red with white dots. Since I hadn't gotten started on trying to alter it to fit me better in the year since I bought it, and since I had never worn it, I decided that cutting it up for a scarf wasn't too much of a sacrifice. 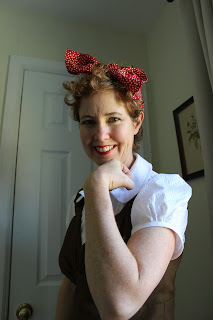 The whole outfit, including the white blouse, was made by me, which is rather in the spirit of the era, if I do say so!

Posted by Virginia at A Sewing Life at 1:49 PM