With my new interest in swing dancing comes a curiosity about the properties of various cuts of skirts. Basically, I'm back to being six years old and wanting a twirly skirt. Except that, unlike when I was six, if I actually try spinning around very many times in a row I get dizzy and extremely nauseous.

Vertigo may curtail over-vigorous spinning, but it does nothing to squelch my dressmaking fervor. I would have tried this skirt as a full circle but...I was attempting to get a whole dress out of my 2 1/2 yard cut of rayon challis. With a little judicious adjusting of the angle of the skirt's side seam, I was able to cut a bodice (from a different Simplicity pattern) and version A of this skirt out of my yardage.

That skimping turned out to be for naught, as the bodice portion of the project ended up looking, well, bad. I did not like the contrasting white collar I had chosen, and the main fabric was very drab around my face. So I could perhaps have had a full circle after all, but this is more than full enough. All for the best, I'm sure.

Another reviewer on PatternReview noted of this pattern that it turned out too big in the waist on her first attempt. I had a similar experience. Since I was intending to make a dress, I measured the waist circumference at the seamline on the pattern prior to cutting out. When I tried on the basted-together cut pieces of fabric, the waist was about five inches bigger than I had measured! Yes, I did staystitch the waistline, but the stretching properties of the bias cut sections more than counteracted the staystitching.

To bring things back into line I cut a piece of rayon seam binding the desired waist measurement. After marking on the binding the center front, center back and sides, I stitched the binding to the waistline, easing the skirt to fit it. Problem solved, and there are no gathers or tucks at the seamline. It amazes me that five inches of excess ease could disappear without ill effect. 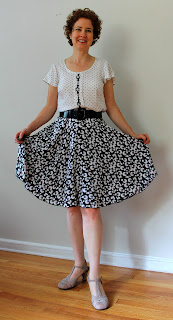 Once it became clear that the bodice was not going to work out, I added side inseam pockets, a 9" invisible zipper and a waistband (with 1" elastic inserted in place of interfacing). My husband marked the hem using our genius hem marking technique. Wow, the hem prior to marking and trimming was incredibly distorted! The difference between the lowest and highest spots was almost four inches!

As things were as short as I wanted them to be at that point, the hem was finished with a serger rolled edge.

I have no idea why I chose a black slip for this action shot, but here is how she twirls: 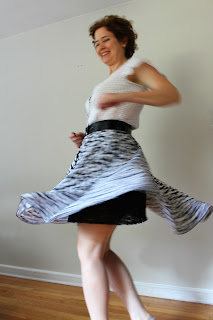 Posted by Virginia at A Sewing Life at 11:32 AM