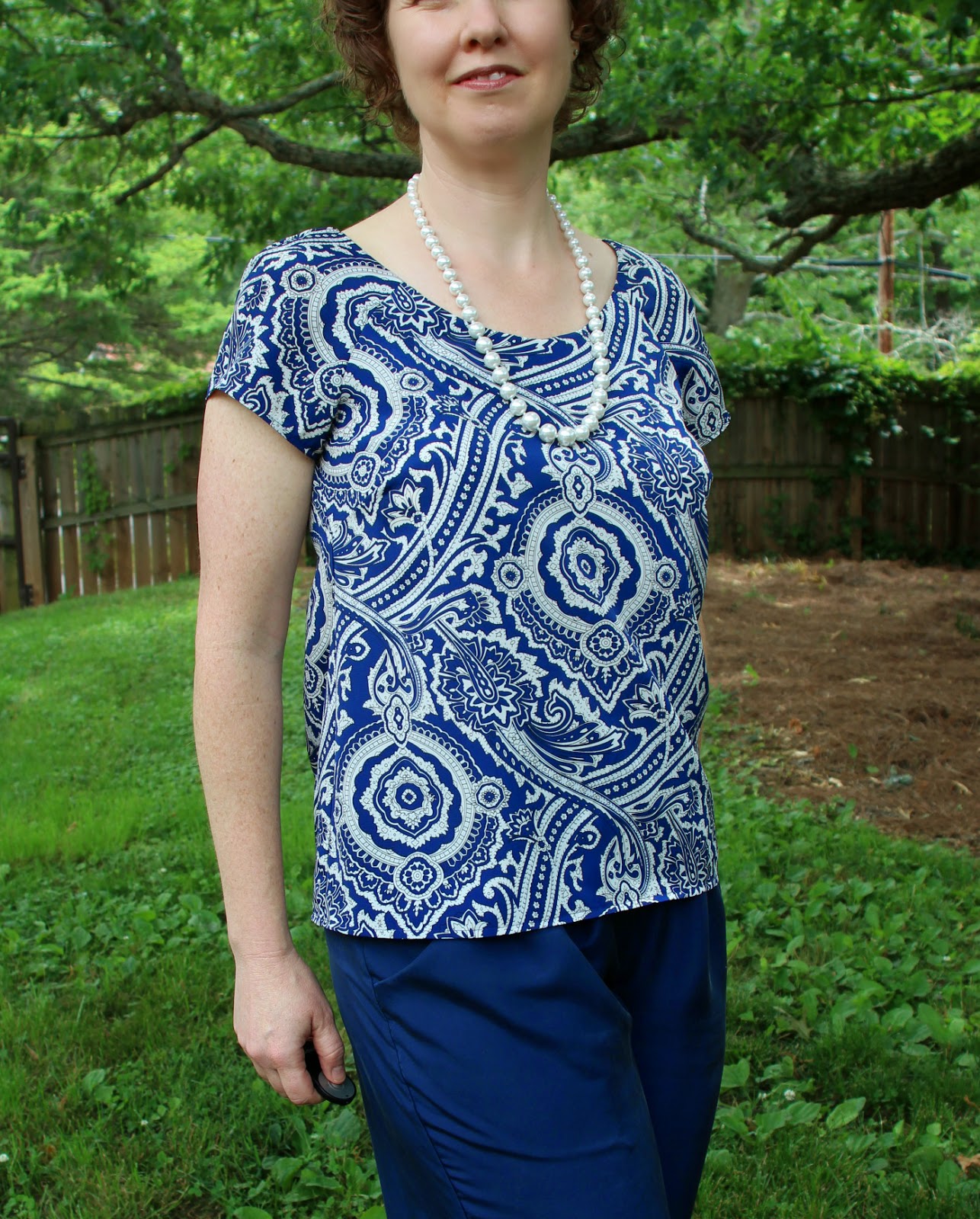 Indie Pattern Month on The Monthly Stitch got me to thinking about the infamously-named Skinny Bitch Curvy Chick pattern company: why hadn't I tried any of their designs? I had downloaded the free Tonic T-Shirt pattern, but not made it up.

SBCC (let's just call it that, shall we?) is the creation of petite Betsy, who writes on her website: "... I have realized the lack of options for petite ladies in both the ready to wear market and home sewing patterns. Sometimes it is just about the right proportions--not just making clothing shorter." Yes, there's the rub. It makes sense that petite clothing needs to be scaled to the smaller person in every dimension--including collars, cuffs and other details--to look harmonious and flattering. And the petite figure may not be able to successfully pull off the same type of drama that a taller person can. So the idea of a line of patterns especially designed with these considerations in mind is appealing.

When the New-To-Me contest was announced, I decided that trying out an SBCC pattern would be a great way to participate in Indie Pattern Month. Since my failure to make up the free Tonic tee seemed to indicate that I was not extraordinarily excited about trying out another knit t-shirt pattern (the Lady Skater block is working pretty well for me at the moment), I decided to branch out a tiny bit to test the Mimosa Blouse, a raglan-sleeved woven t-shirt with bust darts and an optional neck tie.

This top is very similar to Sewaholic Patterns' recently-released Belcarra Blouse (among other basic patterns), but I chose the SBCC version for these reasons: 1.) Designed for petites! 2.) Bust dart 3.) Option for a tie 4.) Slight vee shape to the neckline 5.) Available as a PDF.

I made a quick muslin, which led me to a few somewhat unexpected conclusions: 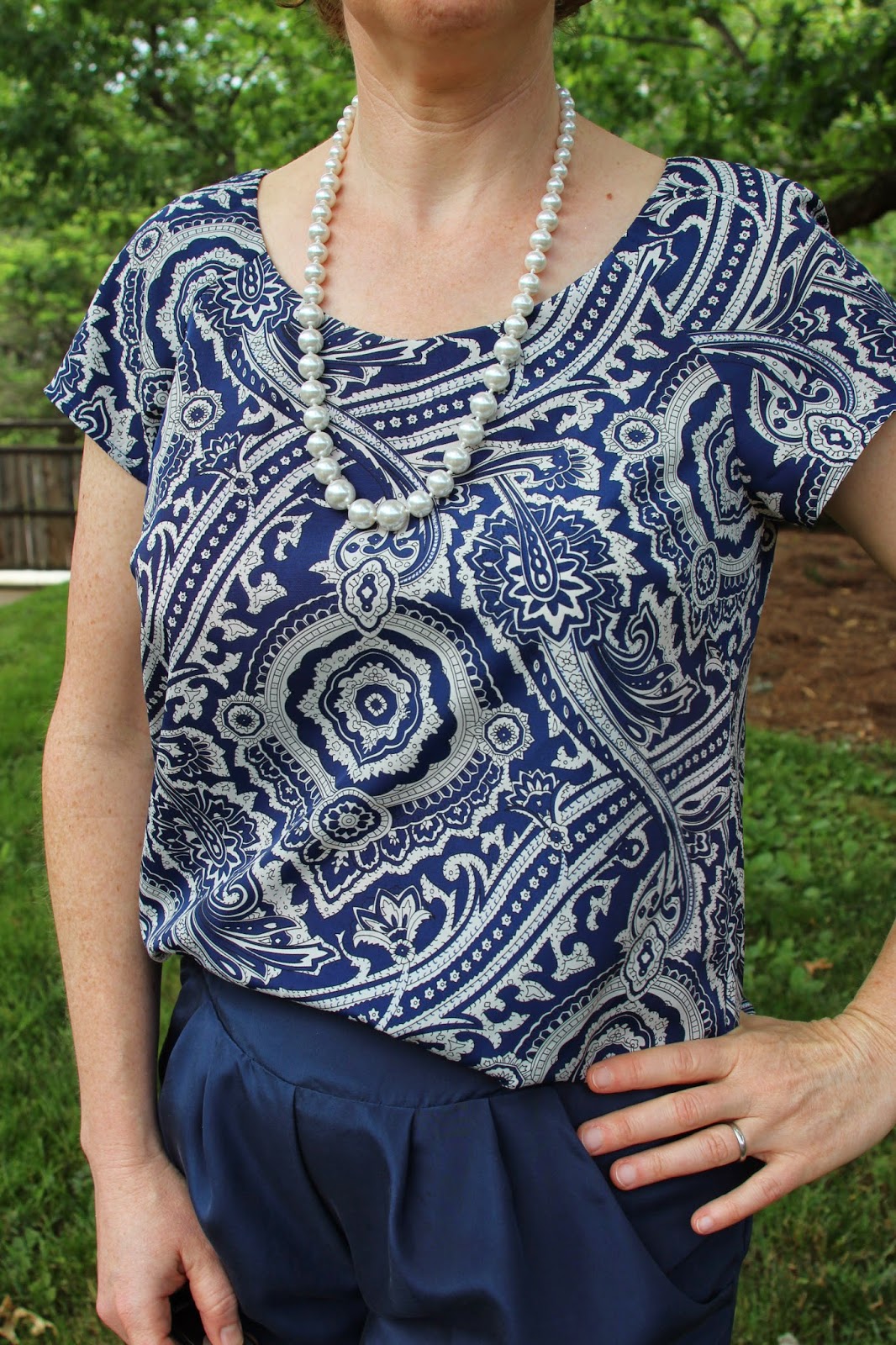 So. Here we are then, in a very, um, vivid scarf print, 100% polyester challis from Hancock Fabrics.  This top doesn't take much fabric. Without the ties, a short person using something in the Small size range can make the blouse with a yard of 54" wide fabric. 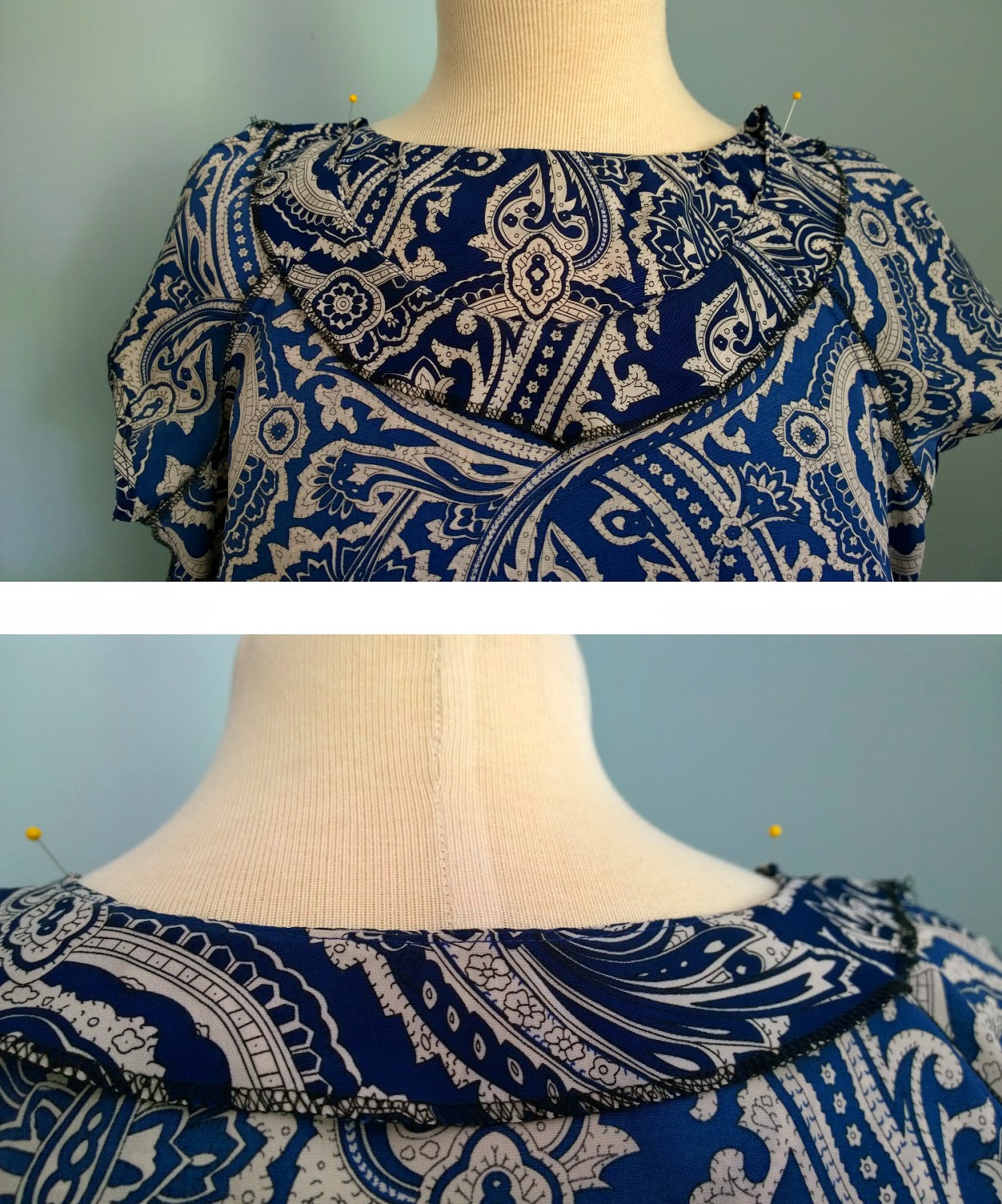 Above you can see the neckline finished with my self-drafted facing. [Note: This top demonstrates why true dressmaker's forms have collapsible shoulders; it is not possible to get this top onto my display form. Consequently, it is just pinned in place.] I didn't realize until writing this post that the example top on the SBCC website also seems to be made with a back neck facing rather than finished with bias binding as the pattern instructs. How interesting! Look closely at the photo of the coral top above and I think you will agree that there is a back facing there. 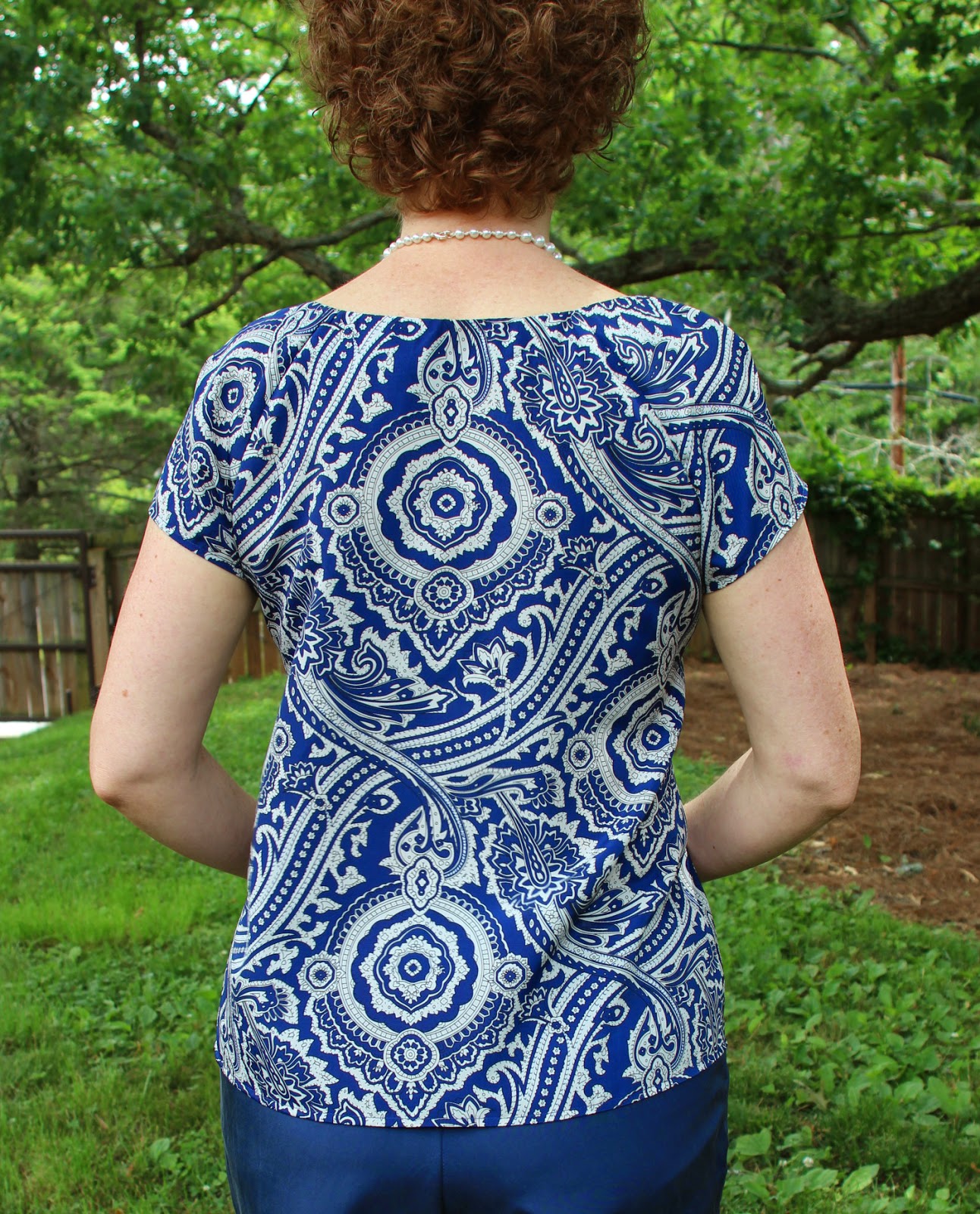 The fit is good through the shoulders and upper back. At the hip, I graded out to size small. 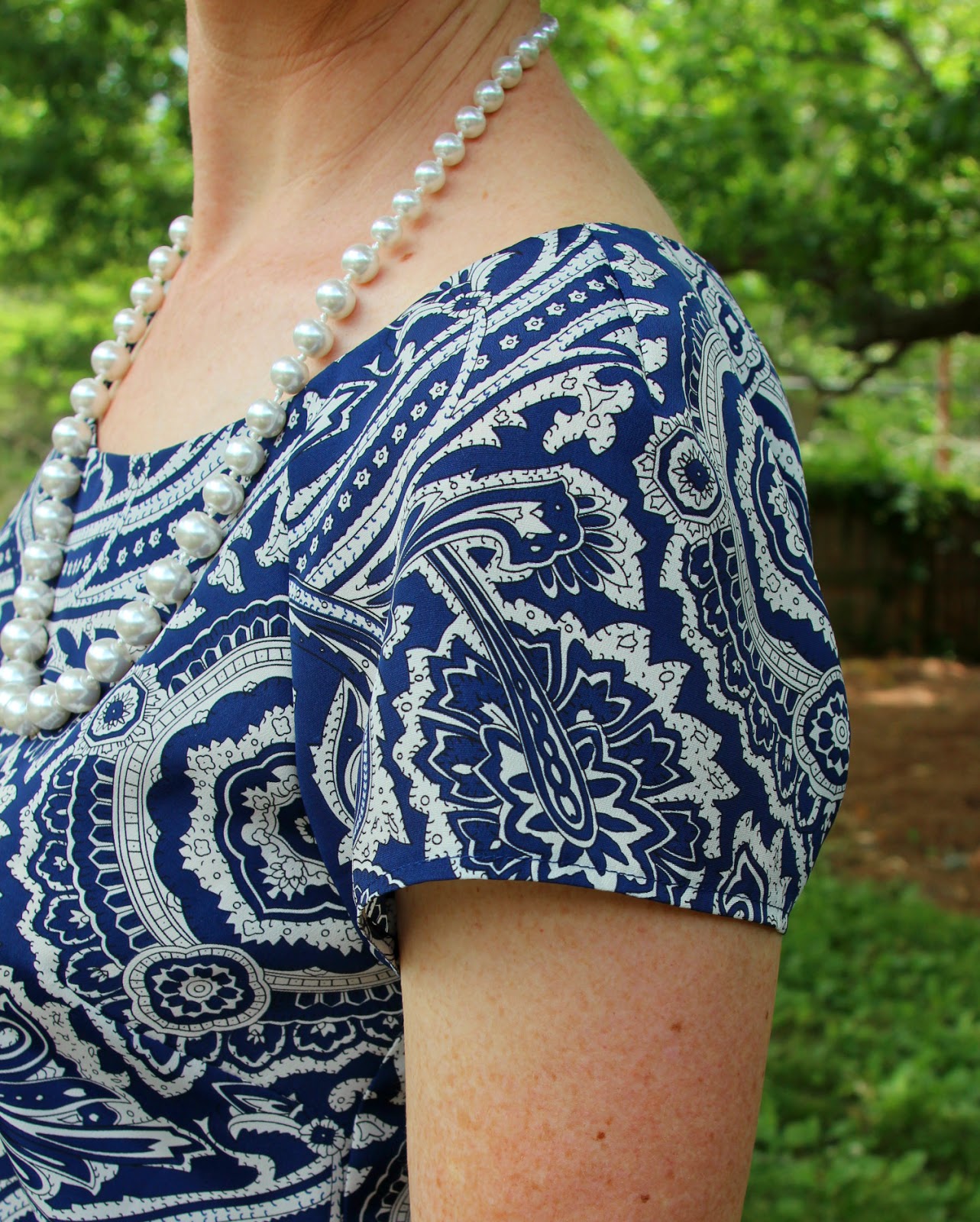 The shoulder dart shape in this size works well as drafted for me. I read a few other reviews that spoke of needing to change the length or depth  of the dart.

The bust darts needed to be lowered and shortened for my middle-aged figure. No big deal; I just moved the dot for the tip of the dart down about 3/4" and shortened it about 1". The dart legs stayed put.

On the subject of the neck ties, I have a few thoughts. First, as Debbie Cook of Stitches and Seams pointed out (but I can't find the exact link to her post and a popup keeps preventing me from further searching (?!)), the notch marking the attachment point for the tie is too close to the neckline edge and must be set further in to the body of the blouse to allow the facing to be attached.

Also, as I said before, the tie annoyed me on my muslin version. This was possibly because the bias neck facing didn't give enough support to the tie, or because the tie was too heavy (the pattern instructs you to interface it, which seemed like overkill to me once I had sewn it), or because the tie was too long for me or possibly because ties hanging down in front annoy me. I never realized the last point before, but now that it has occurred to me, I'm not sure I'll be trying one again. If I do, I will make it shorter, skip the pattern instructions regarding interfacing and edgestitching and cut it on the bias for better drape. 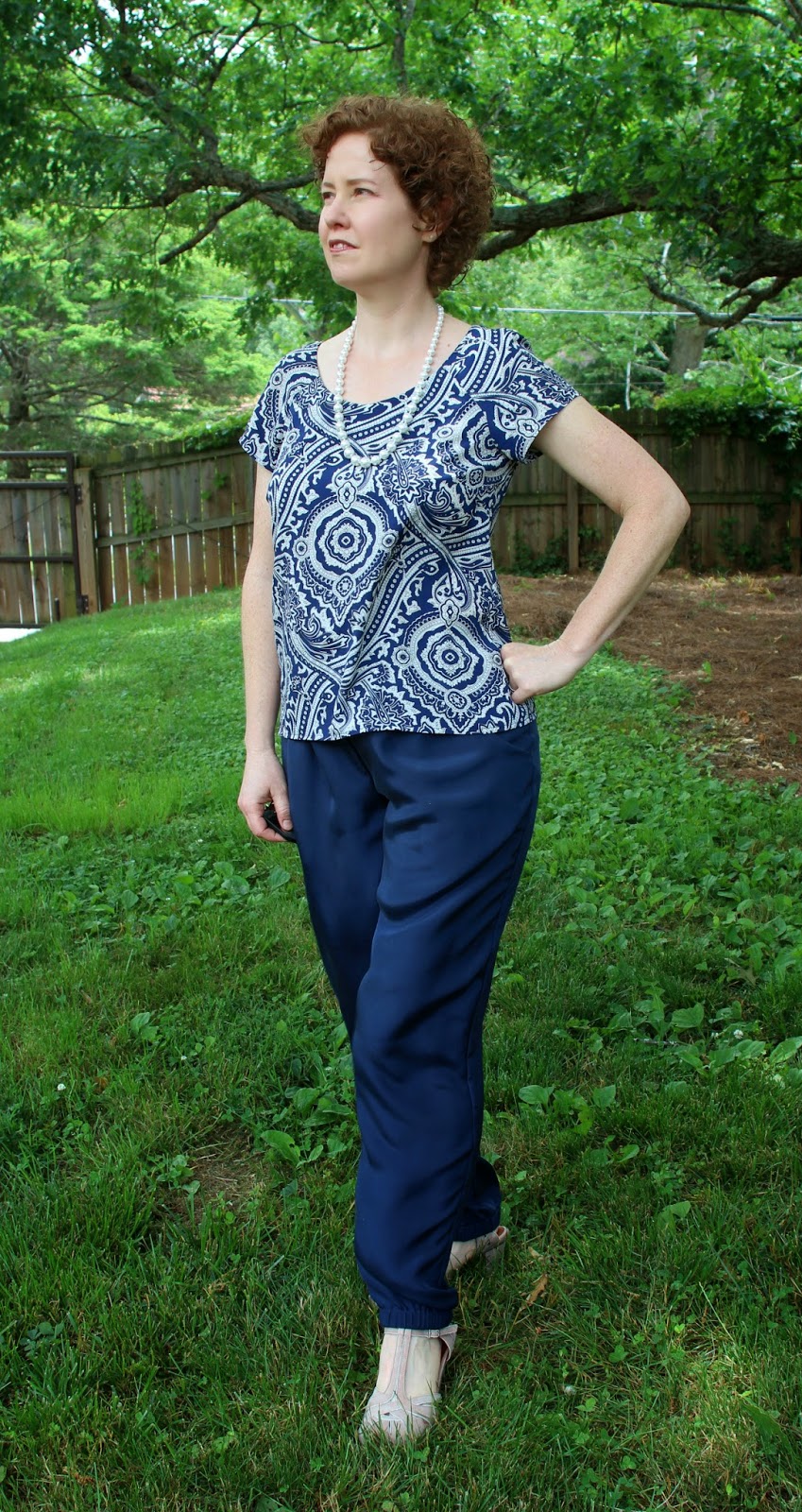 I'll say a bit more about the pants in another post; these are Simplicity 1887 in silk crepe. Very luxurious and light as a feather! I'm going for the "Sporty Luxe" trend here (a good description of the idea is given in this post on You Look Fab), which is quite a departure for me, style-wise.

I really do like the Mimosa Blouse, and I have at least three versions (complete with fabric selections) in my mind for summer tops. I'm also eager to try some other SBCC patterns based on this very promising first experience.
Posted by Virginia at A Sewing Life at 6:30 PM