The cute pattern photos seduced me. I thought this blouse might turn out a bit too sweet, and so it did. I'm sure I'll wear it to death despite that, as I have no other white short sleeved blouse and need one terribly!

Burda 7831 is now out of print, but still quite available on eBay and Etsy if you'd like a copy. It features a rounded roll collar, front vertical bust darts, back vertical darts, gathered short sleeves and a separate front placket.

My blouse is constructed from a tone-on-tone white stripe fabric from FabricMart Fabrics. This piece was part of a bunch of solid shirtings I ordered in the late spring. Like many of the other fabrics in that lot, this one was listed as 100% cotton but turned out to have quite a bit of stretchy lycra. It did not like to be pressed and would definitely scorch if touched with too much heat or without a press cloth. If it holds up well to washing and wearing, I will forgive its persnickety behavior during construction. If not, I will be less than thrilled with this purchase. 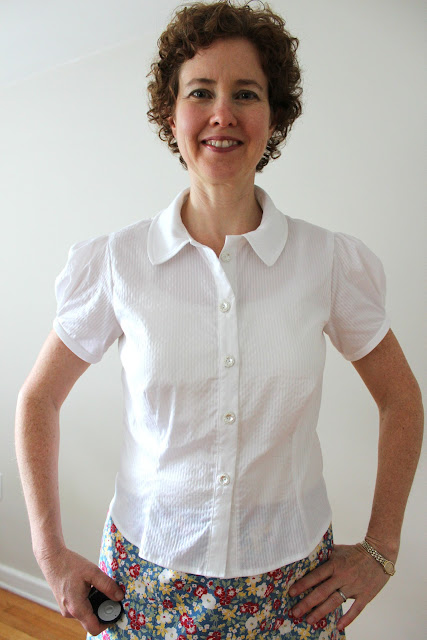 The few reviews I could locate on line (all of which turned out very nicely) mentioned that the construction of the collar and stand are unusual. Both the upper and the under collars are stitched to their respective stands and then these two units are stitched together along their outer edges. The other reviewers said that stitching the collar to the stand was difficult. With a 5/8" seam allowance, it most certainly would be. Much better to trim those allowances to 1/4" before sewing them together, which makes the seam quite easy to sew. I didn't even need to pin.

My collar wants to flip up in the back, and I don't know whether to fault the construction methodology or my sewing for that. Probably my sewing, darn it all.

Sizing was standard Burda, except that this blouse runs very, very short. I like a short blouse with skirts, as the proportion seems better, and I myself am short. But it really is much shorter than any other contemporary blouse--not even 20" from the shoulder to the hem. I used a size 8 at the shoulders and neck, tapering to a 10 through the waist and high hip. I always say this, but now I think I should have used a smaller size through the upper chest. The pattern goes down to a 6, so that would have been possible.

Instead of making a casing at the sleeve hem, I used pre-made bias binding as a sleeve band and gathered the middle 7" of the sleeve hem to fit the diameter of the band, which was determined by measuring the circumference of my bicep (I used a 12" band).

Here is a full length view of the blouse worn with a skirt (Simplicity 4091, which I plan to review soon): 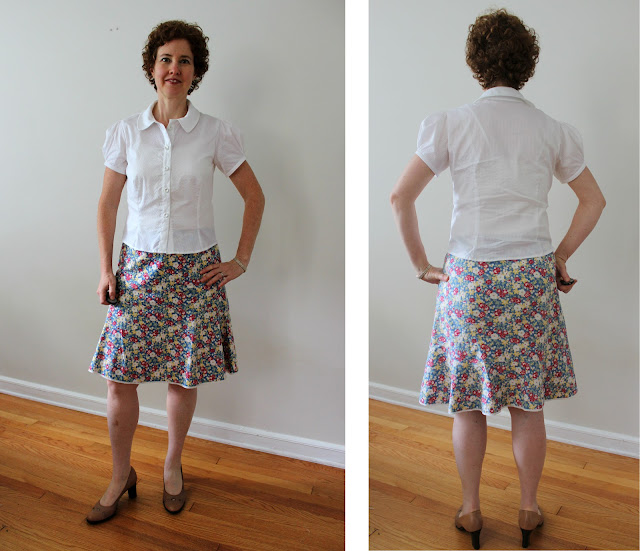 It's a comfortable blouse that should be very useful with skirts, so I'm glad to have it. Now that I'm over the cuteness of the pattern photo, however, I think I'll experiment with a different blouse pattern with a yoke and a more conventional collar and stand construction for the next go-round. Simplicity 2339 is in the queue.
Posted by Virginia at A Sewing Life at 4:58 AM