Rarely do I lead with the back view of a garment, but that's where the action is on my version of Simplicity's 2209 jacket. 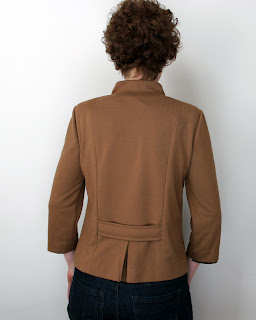 That little peplum and belt there? You like that? I drafted it myself--crazy how excited I am about such a simple and minimal tweak, but that's life in these parts. 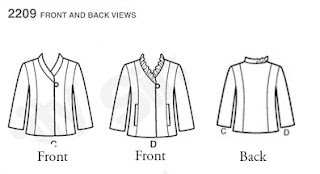 In this boxy jacket, there's not much curve to the back, and that spells trouble for my swayback. Instead of trying to make the princess seams more curved, I thought of adding a little pleated panel and a belt.
Despite being maniacally pleased to have had and executed this idea, I must confess it's quite simple to do. I measured to find where my back waist curve begins, and split the back pattern piece, plus a seam allowance, at this point. Then I added a second panel for the peplum portion. 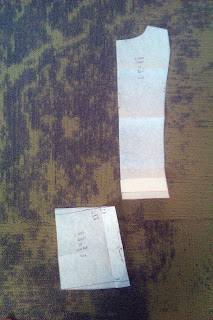 The peplum was altered for swayback, and extended by the amount that I wanted to pleat out in the center. 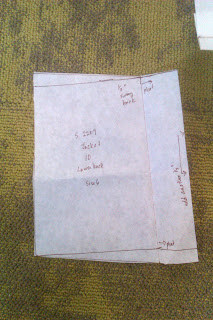 The little belt thingy I just made up as I went along. It's a tube, turned, pressed, topstitched and sewn into the princess seams. 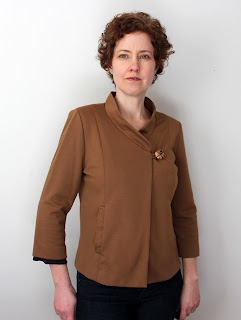 Front view, showing standaway collar (not sold on this for me one bit), welt pockets and asymmetrical lap. 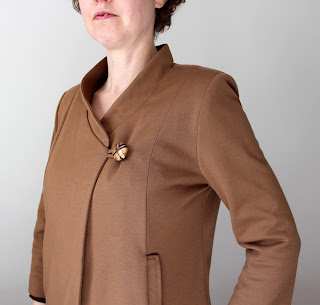 I needed small shoulder pads. Love this button, which I got in a two pound assortment from Fabric Mart. The fabric is Sophia double knit from House of Fabrics.
The second version is from a remnant of silk tweed. I had just enough for this short and very simple jacket, with no collar or pockets. 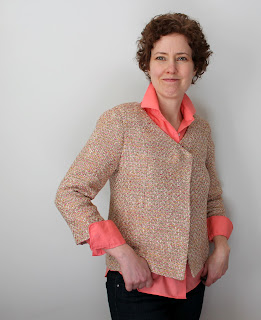 It's a nice enough jacket, but the fit isn't the best. I need a little more room in the bust, as the jacket kind of rearranges itself during wear. Also the armholes seem a bit low.

I used two large snaps to hold this jacket closed. I may add a button on top for decoration, or I might make a removable embellishment. Or I might just move on to the next thing, as is my wont! 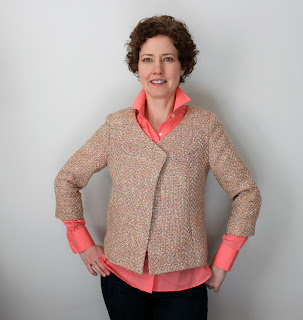 Again there are tiny shoulder pads, custom drafted for this jacket. 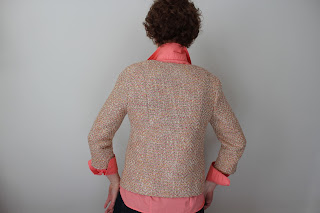 A plain back this time, which worked out fine after all!
Posted by Virginia at A Sewing Life at 10:29 AM