Luckiest Girl in the World 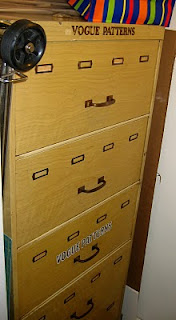 That's me today, because I have a genuine vintage Vogue Patterns cabinet! Ah, Craigslist, you have been good to me before, but this $20 find takes the cake. Even though my long-suffering husband had to drive me to the back side of beyond to get this (as the seller was giving directions, he said, "Now here's where it's helpful to have a four wheel drive truck"--how fortunate that we do), and even though wrestling it into my sewing room closet was extremely difficult and even though I had to reorganize all my precious closet stuffings, I am completely thrilled.

The Vogue Pattern Company of years gone by was no slouch when it came to specifying a cabinet. The action on these drawers is smooth. Now I can thumb through my patterns with the greatest of ease. 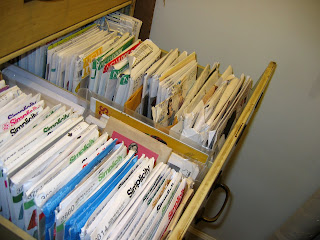 And don't worry--only two of these drawers hold patterns. I do have a goodly collection, but not five drawers worth. The top drawer has leather, the next is interfacing (what heaven to have a good place for it!), then patterns, then gifts and sewing machine repair stuff.

In actual sewing news, I am so pleased to show you this blanket. The sixties-era wool was a $6 yard sale purchase, and the similar-vintage butterfly print came from the sale of a fabric collector, Lisa Shoemaker. I love the two together so much. I know that binding a blanket in cotton isn't the typical choice, but really, why not? This binding tutorial from Crazy Mom Quilts tells you nearly everything you need to know about how to make a binding. I wanted to see as much of the butterfly print as possible, so I cut a 6" cross grain binding for a finished binding width of 1 1/2". 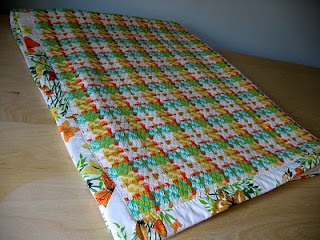 I get that quilters favor handstitching the binding on the back side, but I don't totally understand why. This three-step zigzag looks good to me.
Posted by Virginia at A Sewing Life at 2:26 PM 4 comments: 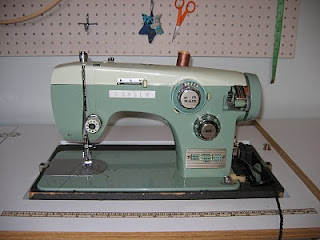 She's really not wee at all. She's a hulking chunk of nearly solid metal. And she sews with all the solidity one might expect from an almost-50-pound-supposedly-portable machine.

My SuperFriend McKenna Linn could not face lugging this sewing machine through an upcoming move (she has a couple hundred other vintage beauties to relocate). So she looked around for an adoptive home...there I was! 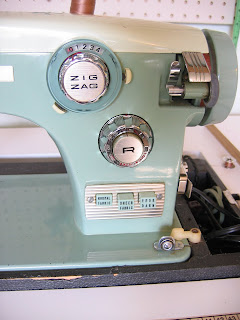 McKenna had found this machine in a thrift store, but hadn't done any work on it before passing it along to me. When it arrived at my house, the handwheel wouldn't turn, but everything looked very clean. Ah, the needle was striking the needle plate. The needle was inserted incorrectly and was bent almost 1/4" to the front!

Then I discovered that the hook had been broken and repaired with Superglue. Imagine.

I borrowed a hook from another machine (it is the Singer 15-class type) and we were almost in business. 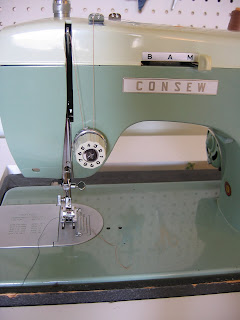 The tension was and remains a bit of a challenge. It was simply spinning around and around in its socket. I managed to fix it up for a while, but it's now gotten out of whack again and the thread is jumping out of the top hook on the tension assembly. I think maybe I don't have the wire loop in the proper position.

The machine has a wonderful 1.5 amp motor. Lots of power, but even better, very smooth. It takes standard low shank feet. I quickly got tired of moving the low shank snap-on adapter between this machine and my Juki to allow those two to share my collection of snap-on feet, so I purchased a generic low shank snap on adapter from Gone Sewing, an eBay seller.

This is a left needle position machine. I have two other left needle machines, my Necchi BU and Universal Deluxe, but those are high shank. Left needle means that, when set for straight stitch, the needle is in the left half of the slot in the needle plate where the needle goes down to interact with the bobbin. The needle position is not adjustable on this machine. Presser foot pressure is fully adjustable with the common push-button, pop-up assembly. There are two nice spool pins and two thread guides (nice!). But the machine doesn't do parallel rows of stitches even with a double needle (such as you would use on a hem for knits), since it is the older needle arrangement with the eye facing to the side.

The stitches on offer are straight stitch, zigzag and blind hem. The machine takes cams, but arrived here with only one on board. The chances of finding compatible cams seem low, but who knows? They are a top hat design, in light sage green.

Consew is known as an industrial name, and I haven't yet found other examples of a Consew-branded domestic. Do you know of any?
Posted by Virginia at A Sewing Life at 9:59 AM 7 comments: