I'm an enthusiastic follower of sewing blogs. I don't comment enough, but several years on, I still enjoy the day-to-day voyeuristic glimpses into what fellow sewers are creating and thinking.

Over time, I've learned that there are some blogs I love for their unique voice and humor, some I love for their focus on process and technique and some I love for the quality of the visual presentation. But I've noticed that, strangely enough, my love for a blog and its point of view is not necessarily any predictor of how well that blogger's amazing projects will work for me. Who among us hasn't hastened to interpret something awesome we saw on a blog, only to have it flop for us?

Somehow, though, I've never gone wrong in slavishly copying Shams of Communing With Fabric. This time, it's a pants pattern that appealed to me, but which I probably wouldn't have actually purchased without Shams' intrepid leading of the way.

I was so uncertain about how to fit these pants that I made a muslin, which isn't pictured here (it was rather yucky stretch velvet, which didn't show any details anyway). I made the muslin in size medium, which was roomy, especially since the fabric had a good deal of stretch. Although the pattern provides lines for shortening above the crotch and below the knee, there is no provision for shortening below the crotch and above the knee. So naturally that's what I needed. Without that adjustment, the curved shaping got lost in the bend of my knee.

I measured down a consistent depth from the above-crotch shortening line (about six or seven inches) and drew a line on both front pattern pieces and the back pattern piece. I reduced the length there by one inch, below the knee by one inch and effectively above the crotch by one inch by using two inch elastic for the waist casing rather than one inch as specified by the pattern. Then I think I removed a bit more from the lower edge. I'm 5'2", so that all makes sense.

For the second version, in black ponte, I used the size small back piece, since the pants seemed most baggy in the back. I liked the resulting fit, which isn't tight at all but still is slimmer than I have been wearing in pants recently.
For the third version I used a stretch cotton velvet herringbone that I've been hoarding for the right pattern. I think it came from FabricMart two or three years ago. I did not make any further changes to the pattern, and I was pleased to find that there was still plenty of room using a stretch woven rather than a knit. 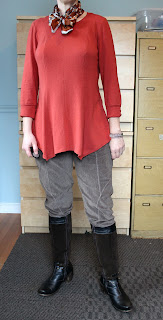 I really like this pattern and I am actively searching for some stretch denim to make more. But look for some thoughts on another new slim pant pattern from Vogue, 8859, this one from Marcy Tilton. Shams inspired me to also try that pattern, and I think I like it even better than this one.

Thanks so much for all the great inspiration, Shams!
Posted by Virginia at A Sewing Life at 8:50 AM