Friends, I am fickle.

My constant is a love of sewing machines and a deep curiosity about their different forms. But my sewing partners--well, I love them all for different reasons, but I am not "in love" with them forever. I'm not sure whether I even want a committed, long-term relationship.

I've been playing the field--by which I mean scanning Craigslist--for a while now. Yes, I was looking for trouble, and I found it. 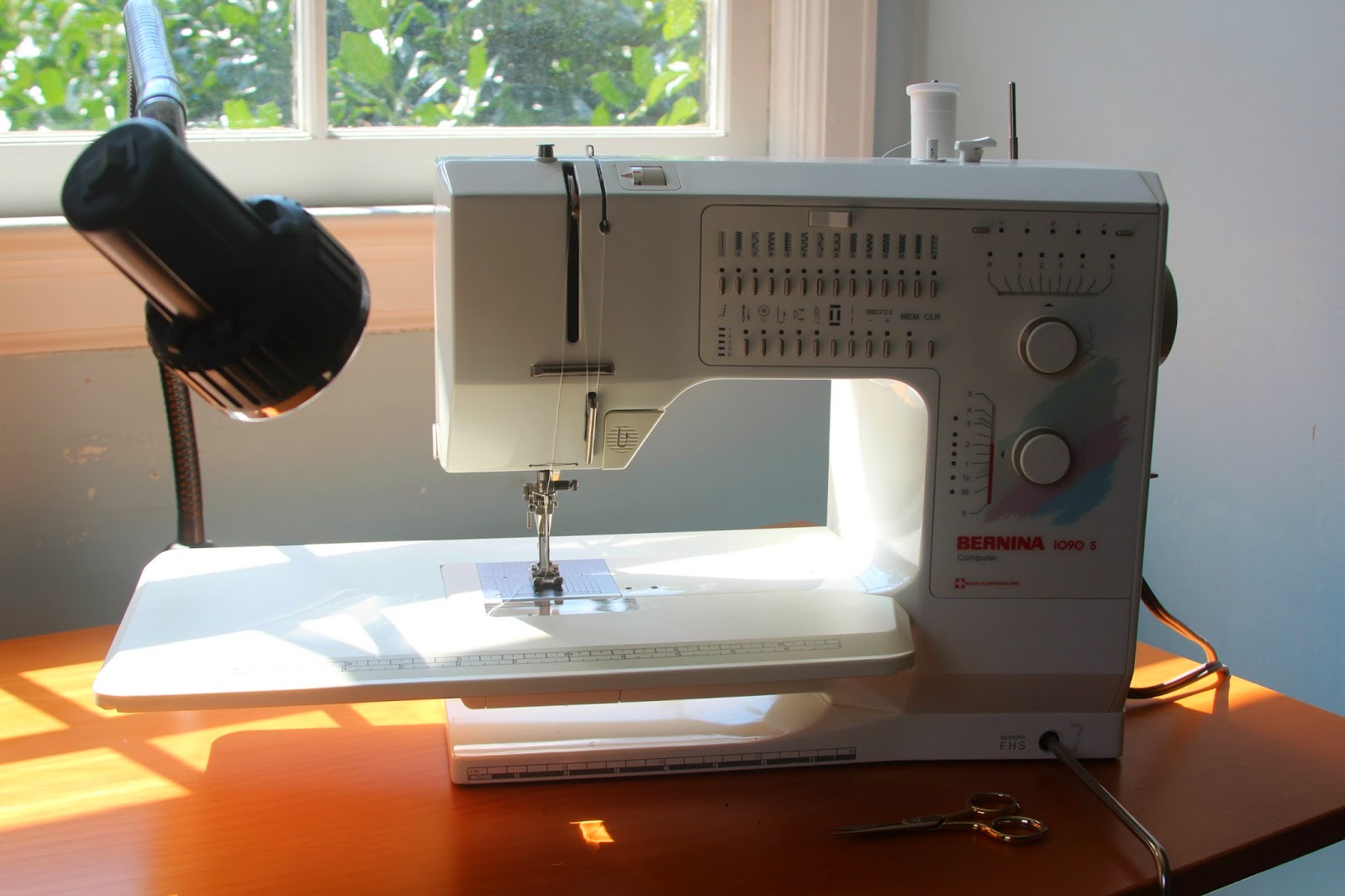 As a form of talk therapy, I want to tell you about my history with Bernina.

I first started sewing as an adult, when I had moved from North Carolina to Boston with my boyfriend (now husband). Right before I left the nest, my father produced a vintage Kenmore sewing machine from the 1970's from his vast horde of goods. That machine is now long gone and I don't know exactly which model it was, but it was a capable machine. Though my parents both sewed, I learned from books (because that's how people in my family did things, pre-internet). And I merrily made lots of skirts, jackets and dresses for my corporate jobs.

Along came plans to get married. I briefly shopped for wedding dresses, but I couldn't get into parsing the different options, pros and cons of what was available in ready to wear, so I decided to just jump right in to making my dress. I asked my mother if I could borrow her Bernina, a 1000S, and she dutifully packed up the machine and sent it off to me.

What a revelation! I loved that machine, and my sewing became instantly and magically much more precise and easier. Without that pretty Bernina, my wedding-dress-making adventure might have ended before it got properly started and I might have bought something off the rack after all. In retrospect I could have saved myself a lot of aggravation and expense if I had just secretly kept that machine and told my mother that it got lost in shipping or stolen from my house or some other dire fate.

Instead, I packed it back up and shipped it home to North Carolina after my honeymoon, and soon I found myself at a Bernina dealership in the Boston suburbs being talked into a newer, more feature-laden, more sophisticated, more expensive machine, the Virtuousa 160. What a ridiculous name, by the way.

I had big plans for my new 160--but two life events interfered. First, I unexpectedly got a new and very demanding job. Second, I got pregnant. Event #2 trumped event #1 when I became the mother of an extremely high-maintenance baby. Colicky is just not the right word. Not much sewing happened until my son started school (and then stopped school and started homeschool, but that's another story).

By the time I got around to using my 160 in any major way, I discovered that I really didn't love it as much as I had expected. And then the motherboard went out. And then the local dealership displeased me with their attitude. So I just felt mad that this Bernina, which was supposed to be the end-all and be-all of sewing machines, hadn't lived up to my expectations.

So I sold it on eBay. After it was repaired, that is! And I used the proceeds (plus some extra funds) to buy a Juki F600, which I have enjoyed very much.

And yet, there were things I missed about the Berninas: 1. The thing everyone talks about: the amazing, wondrous presser feet, especially the #10 edgestitch foot and the #35 invisible zipper foot; 2. The small diameter of the free arm; 3. The quality of the stitch. I can look at a garment and tell whether I sewed it on my old Bernina or on another machine. And I recognize that no one but me can see this or will care, but still, I do see it and I do care.

So I've been following Craigslist and eBay, and the prices the vintage Bernina 830 and 930 Record machines command are daunting. A beautiful, very complete 930 came up on our local Craigslist, and I certainly considered it, but it was $900. The 830s were manufactured from 1972 through 1977, so they are now between 36 and 42 years old. The 930s date from 1978 to 1989, now between 25 and 36 years old. Based on my experience with a nine-year-old Bernina needing a new circuit board, I felt worried about investing so much in a machine of this age, especially since Bernina is no longer manufacturing the boards.

And then this 1090S came along. The feature set is perfect for me--just enough electronics to satisfy my longings, but not too many. It has the heel-tap for needle-up or needle-down on the foot control, which my 160 did not and which I love. It has the extra-long basting stitch, which the 160 did not have and which I am hesitant to try (because the machines can get jammed in this position if the basting stitch has not been used in a long time and require service to unstick). It has the continuous-reverse stitching feature which the 160 did have and the Juki did not, and which is wonderful for darning.

The 1090S came with everything--case, manual, knee lifter, extension table, all original attachments--and it is in gorgeous condition. Sews wonderfully. The only things I don't love so far are those dated graphics (the pastel swoosh on the front) and the not-terribly bright light. The light is easily addressed, since I have a great LED gooseneck sewing light mounted to my sewing surface (the Reliable Uber Light). For what I considered a great price on a Bernina in great condition, $440, I decided I can live with the graphics. It was manufactured in 1995, so it is 19 years old. Still vintage, but half the age of 830s going for twice the price. True, its electronics are more complex than those in the 830, so we will see how we do.

I loved the Juki's buttonholer, and I also loved how well it started off sewing without sucking the threads into the bobbin area. I will just have to miss those, because the Juki is headed to a new owner off in California as I type.


Another thing I've noticed is that the Bernina does shake the sewing table more than the Juki--maybe a function of the weight of the machine, maybe the difference between the rotary horizontal hook of the Juki vs. the vertical oscillating hook of the Bernina. Might need to rethink my sewing surface!

So, it's being very fun to play with a new toy. Hope I don't live to regret the change, but so far I'm good with it.


Posted by Virginia at A Sewing Life at 3:01 PM