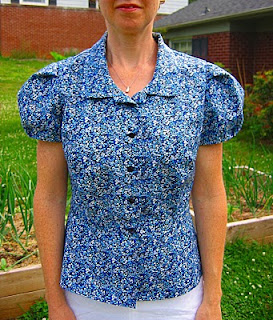 Here we have Simplicity 2501, a fitted blouse with a set-in waistband and a peplum. How I love a peplum! Even though it's quite an odd word, peplum. Odd or not, I think it's the ultimate sway-back fitting solution. 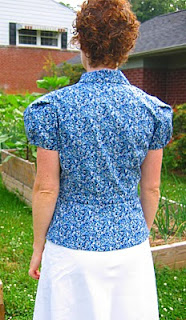 This is one of Simplicity's patterns with cup sizes. I could rhapsodize about that, too. A great public service, the patterns with B-C-D cup size pattern pieces included.
Even though they may be just a tiny bit extreme, the sleeves certainly do add a lot of volume to my underwhelming shoulders. Mostly to help the **five** tucks in each sleeve to hold their shape through a day of wear, I decided to try underlining the sleeves with silk organza. I wasn't counting on quite so much puff, but what the heck. The other advantage to this strategy was that I was able to hem the sleeves by hand, catching the underlining, for a beautiful hem finish with no visible line of stitching. Binding the armscye seam in bias tape became a necessity, as a serger seam finish would not have totally mitigated the itch of the scratchy organza. 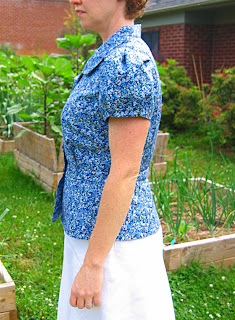 Another simple change I made was to self-line the peplum rather than turning a narrow hem. I had plenty of fabric, and I thought that adding more body to the lower section would improve the hang of the peplum around the hips. If you want to do the same, cut out two sets of peplum pieces, join each set at the side seams (so that you now have two peplums), sew them right sides together, turn and press. I topstitched 1/4" from the edge to make future ironing easier.
Finally, inspired by Gertie, I created a convertible collar rather than any of the lame collars provided by Simplicity. I loved Gertie's tutorial, but decided I wanted both an upper and an under collar rather than a folded collar piece. I found a collar on a vintage Simplicity pattern that looked right, but was much too short. I cut it apart at the center back fold and added five inches to match the measurement of the neck edge seamline on this blouse. It worked out very well, if I do say so myself!
Posted by Virginia at A Sewing Life at 6:32 PM