That's the quest for a "perfect" t-shirt, naturally. Truly, I don't know if I get closer or farther from that objective the more I work at it.

Though I do like the Ottobre Basic Design t-shirt shown in my last post, it does pose a fitting problem that I have yet to solve. Even though the shirt overall seems to have sufficient ease and looks fine when I'm standing still, when I lift my arms, the bodice hikes up over my bust. When I lower my arms, the shirt stays put in the wrong location.

Another aspect of this "hiking up" problem is that the neckline also seems to pull a bit toward the bodice.

I have done the sort of minimal FBA that consists of drawing a bump at the side seams, which is then eased to the back. I have cut different sizes at the neck and shoulder area. I have added more room at the side seams generally. And I've made the top in a variety of fabrics. To a greater or lesser extent, all of these variations still yield the "t-shirt stuck above the bust" situation.

A lack of sufficient width must be a part of this problem, but it seems to me that something about the angle and/or length of the shoulder and the armhole is also not quite right.

Thus was the stage set for experimentation with Kwik Sew 3740. 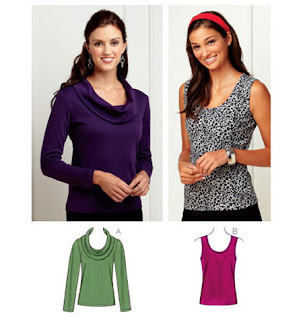 This is an odd choice because, first, Kwik Sew patterns are generally cut extremely large in the upper chest for me and second, this pattern specifically had been tried last year and found guilty of this fault. On the other hand, it is much straighter than the Ottobre pattern, so I thought the comparison might be instructive.

The two views in the Kwik Sew pattern have the same neckline but different armscyes to accommodate sleeves or not. The sleeveless top has an armscye that curves back in and up toward the underarm, which I thought might eliminate some of the folds that I get at the armhole. Below you can see the difference. 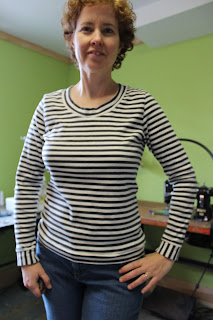 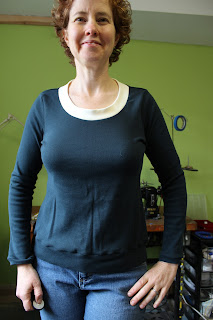 On the left is View A, the sleeved version, with various alterations. On the right is View B, with the sleeve from the Ottobre t-shirt. Much to apologize for here--hair, lack of makeup, wrinkles--but onward! Both of these are made from cotton interlock knit, bought in scant one yard pieces at a recent local warehouse sale. Many choices derived from fabric shortages.

What I see in these pics, and I'm open to different interpretations:


But in neither case does the shirt hike up above the bust and get stuck when I raise my arms. 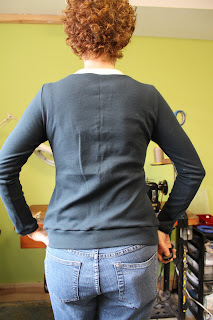 May I just say that as much as I love wearing 100% organic cotton interlock, a little spandex would not go amiss in these tops?

Here are some shots of my alterations for View B. I hope you can see them. 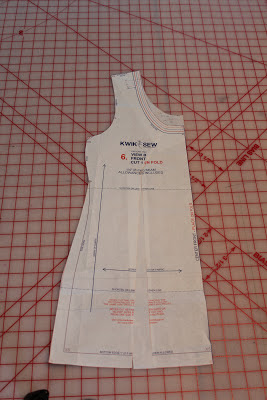 On both the front and the back, I have drawn a line from the apex of the most prominent feature (bust in front, shoulder blade in back) to the lower third of the neck edge and then downwards, parallel to the center fold through the hem. I then slashed both lines, leaving a pivot point at the apex, and overlapped the neck edge by 1/2", spreading the lower edge the same amount. This alteration narrows the chest width and increases the circumference at the lower edge at the same time, both of which I need! If I didn't need the extra width at the hem, I could remove the corresponding amount at the side seam.

I've also filled in the neckline and raised it 1" at center front, but I need to add more for a round neckline. 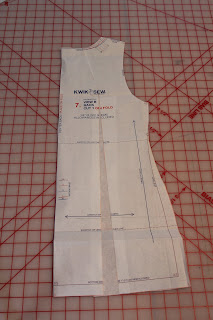 From here I messed around with another scrap of fabric, a thin cottony sweater knit from Fabric Mart. I wanted to replicate Vogue 1261, which has been positively reviewed and made up into any number of adorable versions, but which is said to be very wide in the neck and shoulders. Looking at the photos, I can well believe it! 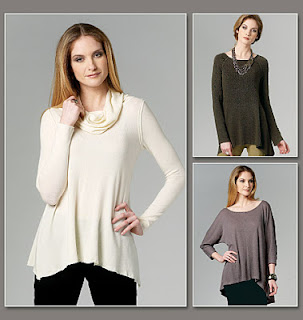 I should have and would have added more width at the lower edge, but I was very short on fabric. So my top is not as full at the hem as the pattern's. And my cowl is much narrower, so much so that's it's scarcely a cowl at all. But that was the maximum depth I could achieve with my fabric! 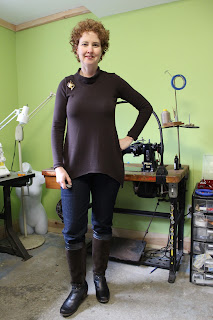 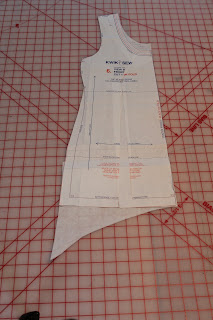 See how easy it was to turn this t-shirt into an approximation of the other pattern? I think this was a lot less work than purchasing and cutting out a whole new pattern. 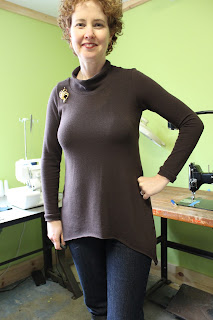 Sure wish this knit had more body and didn't show every bump and strap and seam beneath it. 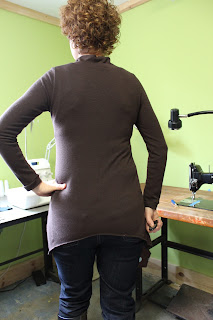 So it will probably be mostly worn beneath a long jacket, like my fabulous, aging Oilily sweater coat. I have had this coat for thirteen years and I love it more every year that passes. It is full of holes and I need to replace a button. I saw the same sweater on eBay recently, but sadly in XL. If I see one in my size, I will buy it without a second thought! 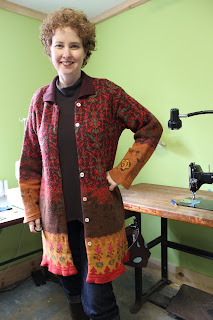 Posted by Virginia at A Sewing Life at 9:21 AM