Not Quite Vintage: Burda Petite Fashion Blouse from 1996 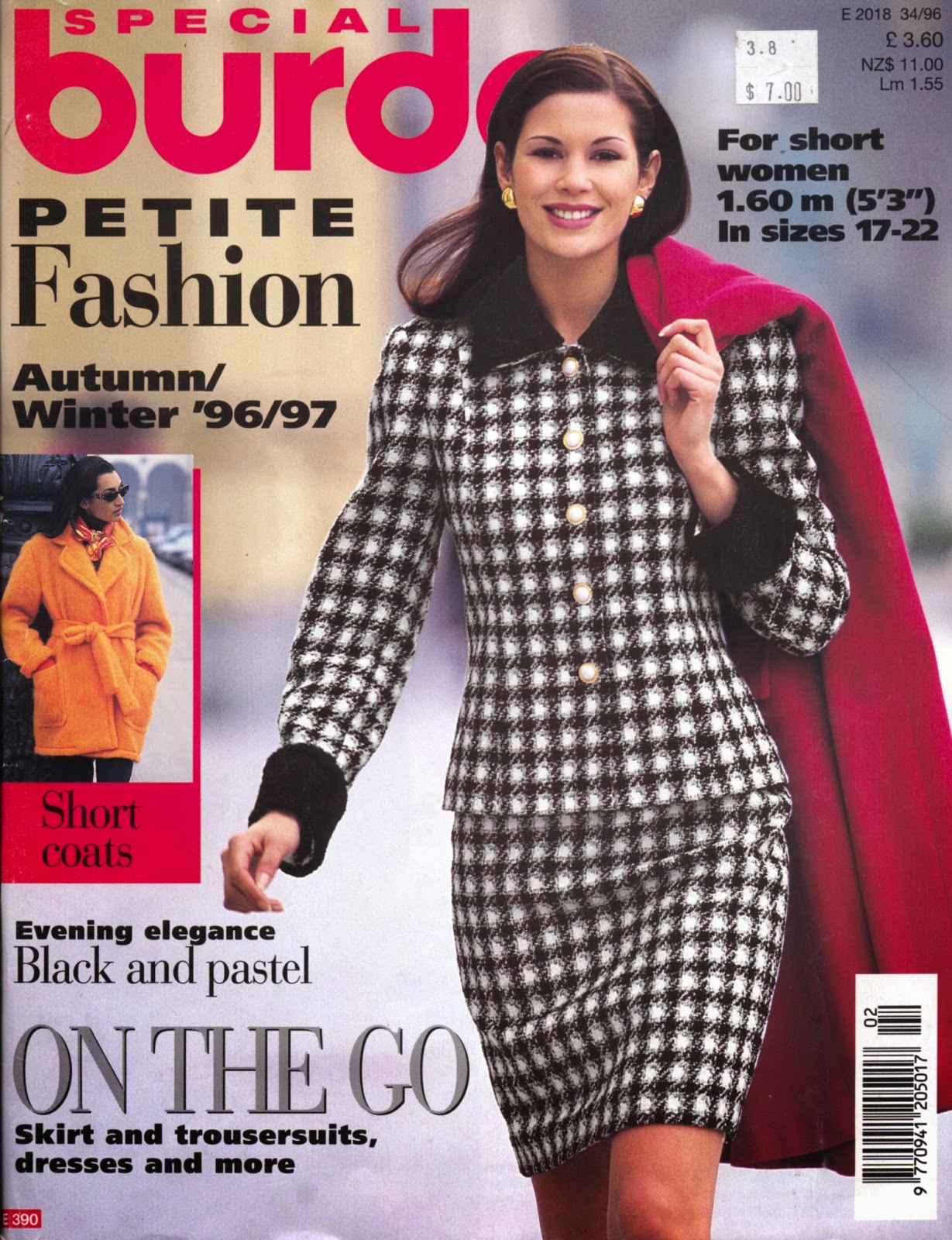 Though I don't know when Burda stopped putting out its Petite Fashion magazine, I have happy memories of sewing from this publication back in the mid-nineties. Sadly, over the course of several moves, I must have decided that my old issues were obsolete, and I threw them out. When I spotted an Autumn/Winter '96/'97 issue on eBay, I bought it for old times' sake and also because I thought it might have some good basic styles. 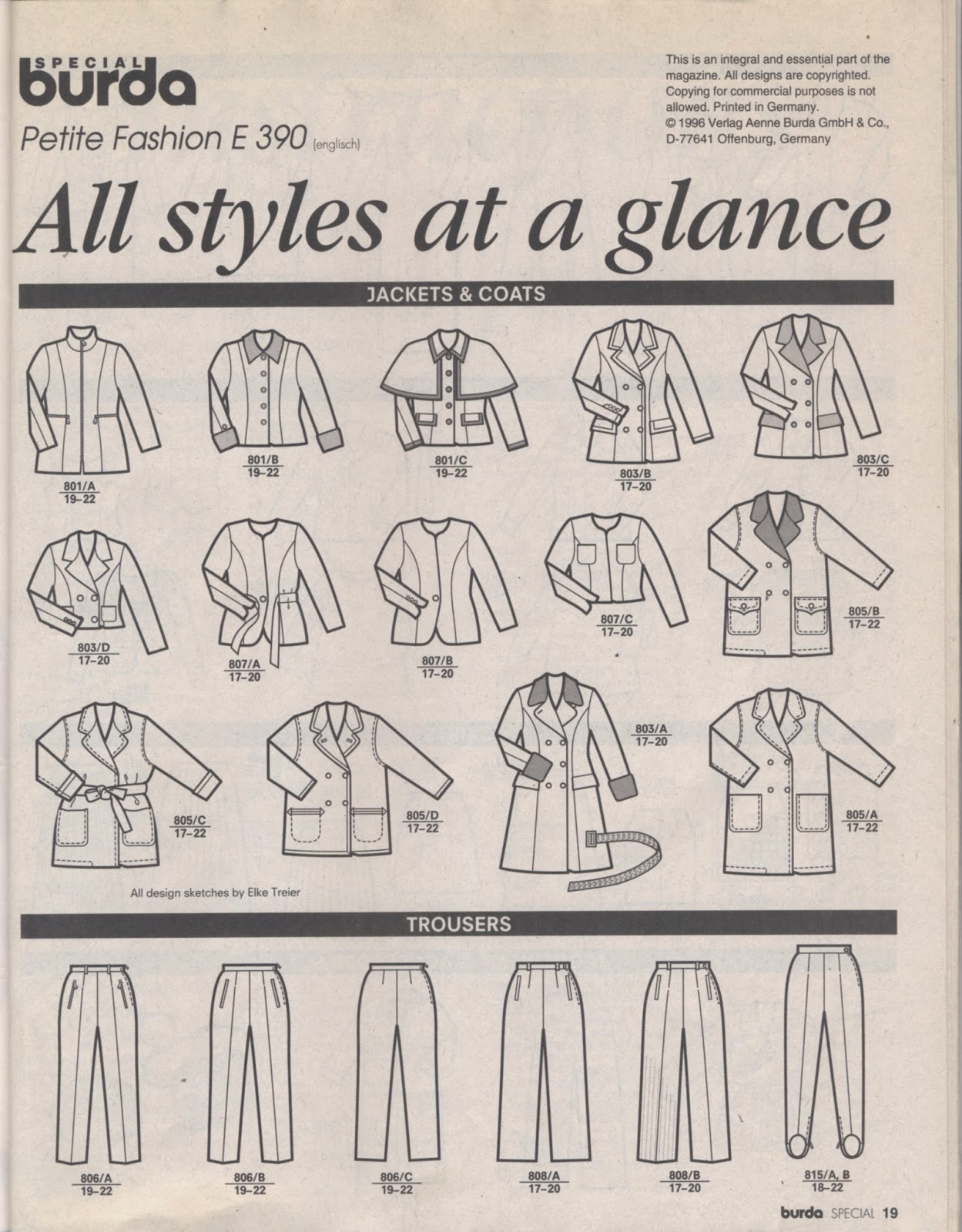 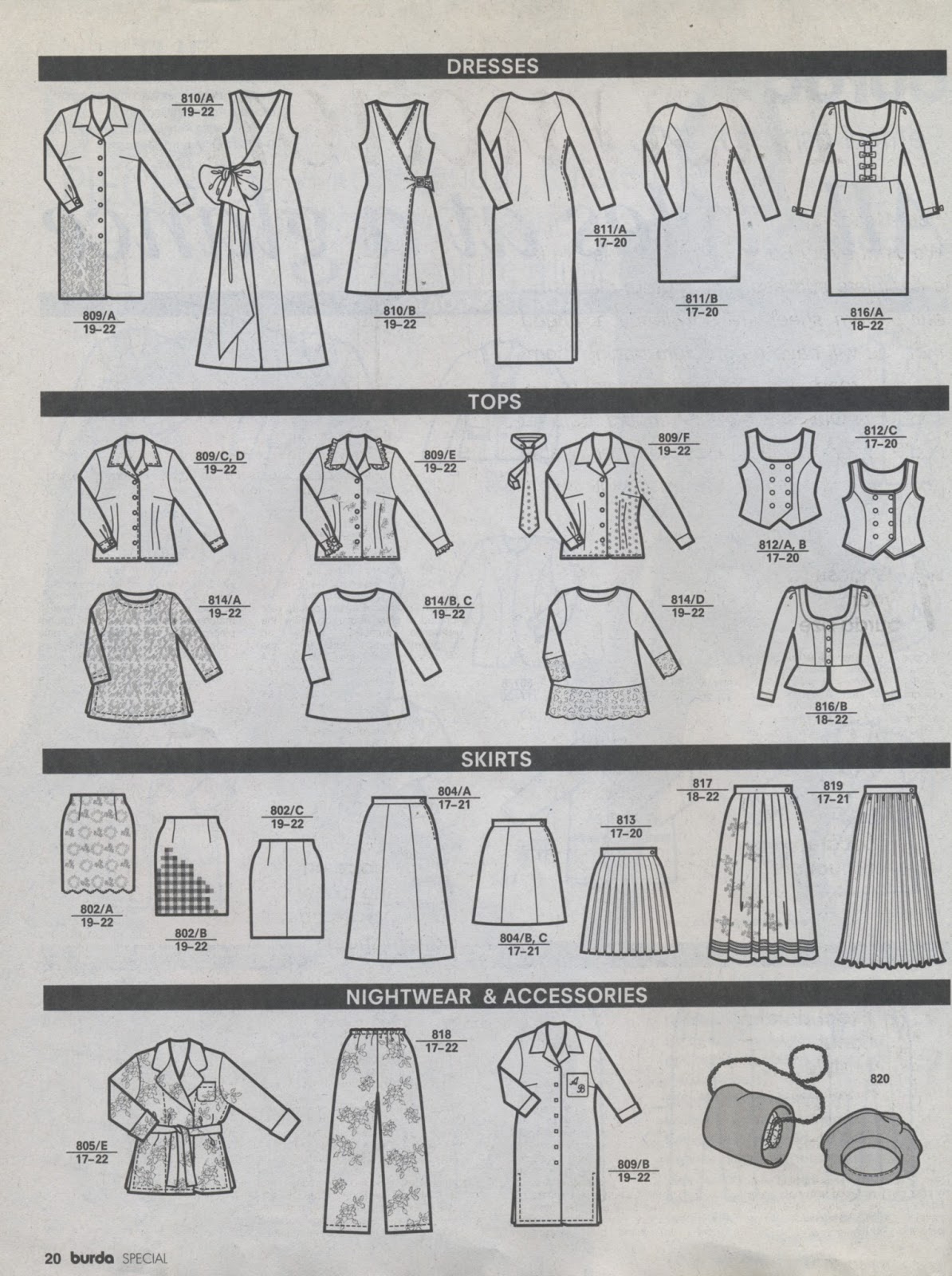 I'm no expert in what's current, but these patterns really don't look dated to me. In addition to the 809 blouse I just made, I'd like to try out the trouser, A-line skirt, tunic blouse and raglan-sleeved dress patterns.  I've seen a lot of long woven t-shirt style tops lately. Here is one of the three versions of that "current" silhouette from this magazine:

I've written about my liking for the convertible collar a couple of times: DuBarry 5265 and Simplicity 9816. I'm influenced in this liking by insightful, hilarious Barb at Sewing on the Edge. In this great post, she talks about the convertible collar blouse as a distinctly feminine style that flatters a lot of women.

Barb also points out that a convertible collar pattern with some shape to it is hard to find, and that is certainly true. My DuBarry blouses have been successful, but I wanted to try a darted pattern rather than one with princess seams. The Simplicity 9816 has darts and looked good when I was standing still, but somehow I made it much too constricting in the arm and shoulder area--very uncomfortable. So I was looking for a fresh start with a darted pattern.

In the Petite Fashion magazine, Burda shows this blouse in a crisp white, in a blue and black bold polka dot, in powder blue silk and in a floral print cotton with a tiny ruffle around the collar edges. There are also (rather boxy) dress and nightshirt versions, demonstrating that this is a very versatile pattern. 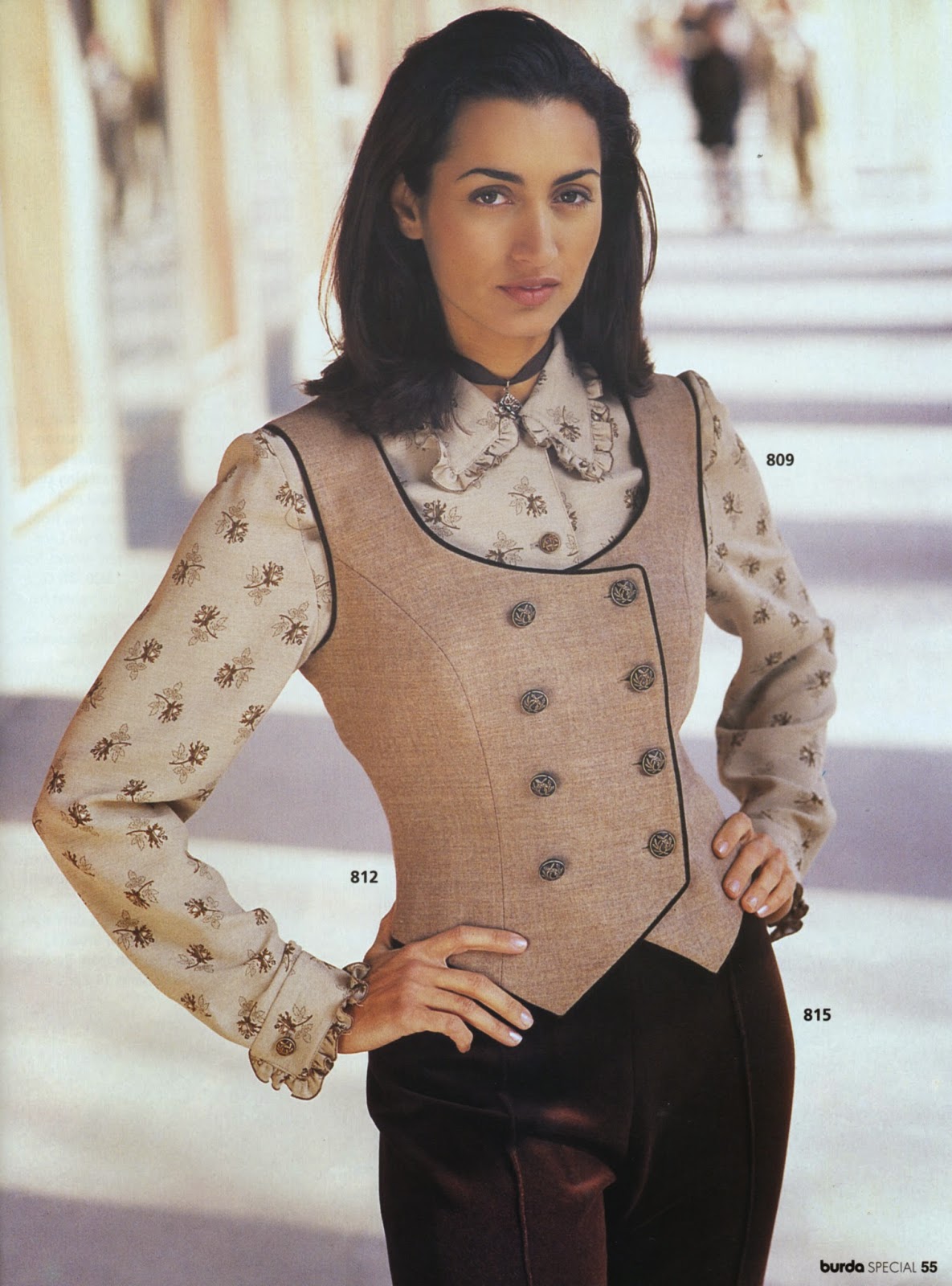 Here is my version: 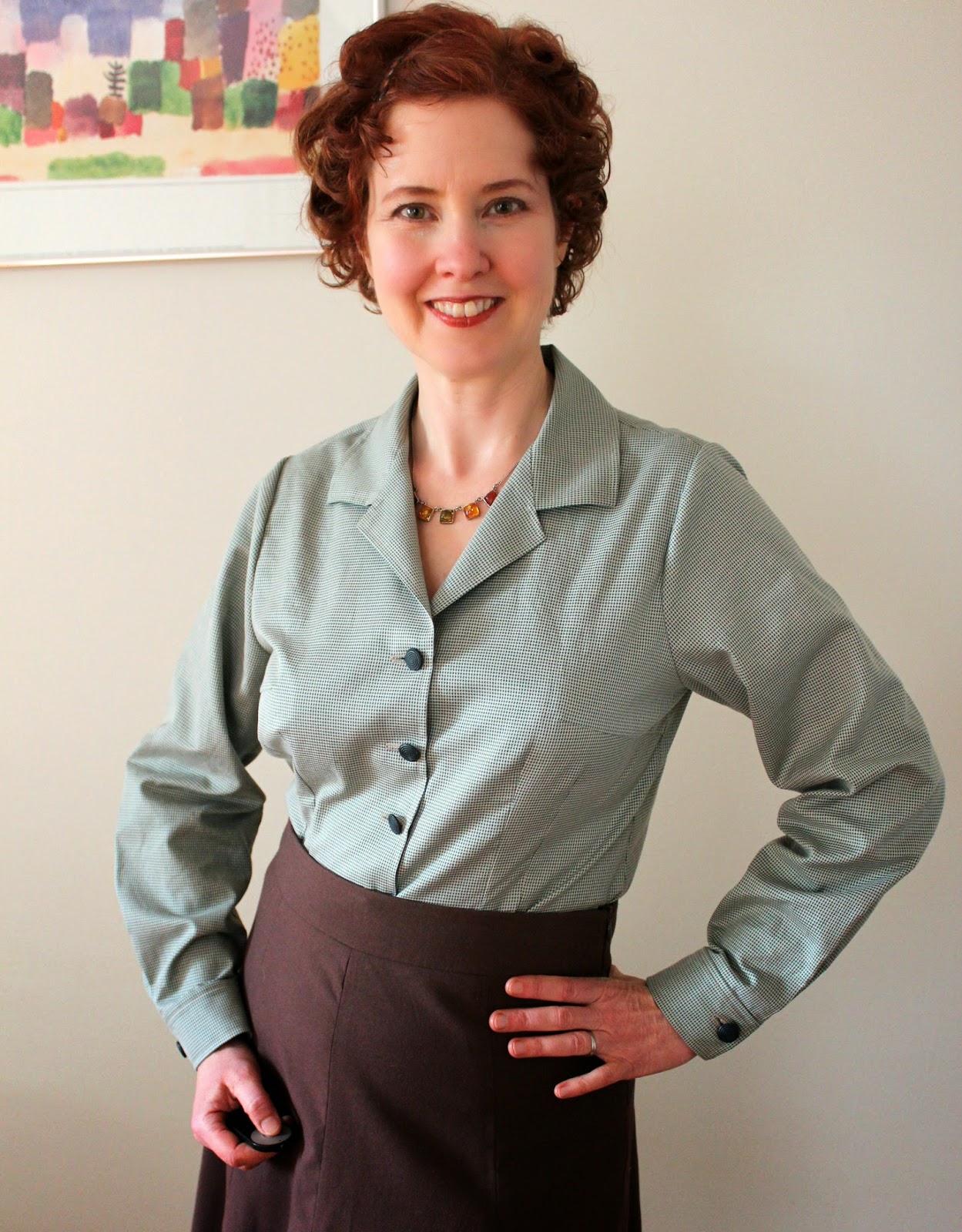 While I appreciate that Burda offers a petite range, I have found that these patterns still require significant alterations to the shoulder area to give me a good fit. After tracing the pattern pieces in size 19 (the smallest size this pattern was offered in, equivalent to a Burda 38) at the shoulder line to size 21 at the hip, I reduced the shoulder width in the front and back by 3/4". Fitting as I went, I discovered that I needed to take another 1/4" out of the shoulder width, for a total of 1". That's a big reduction! 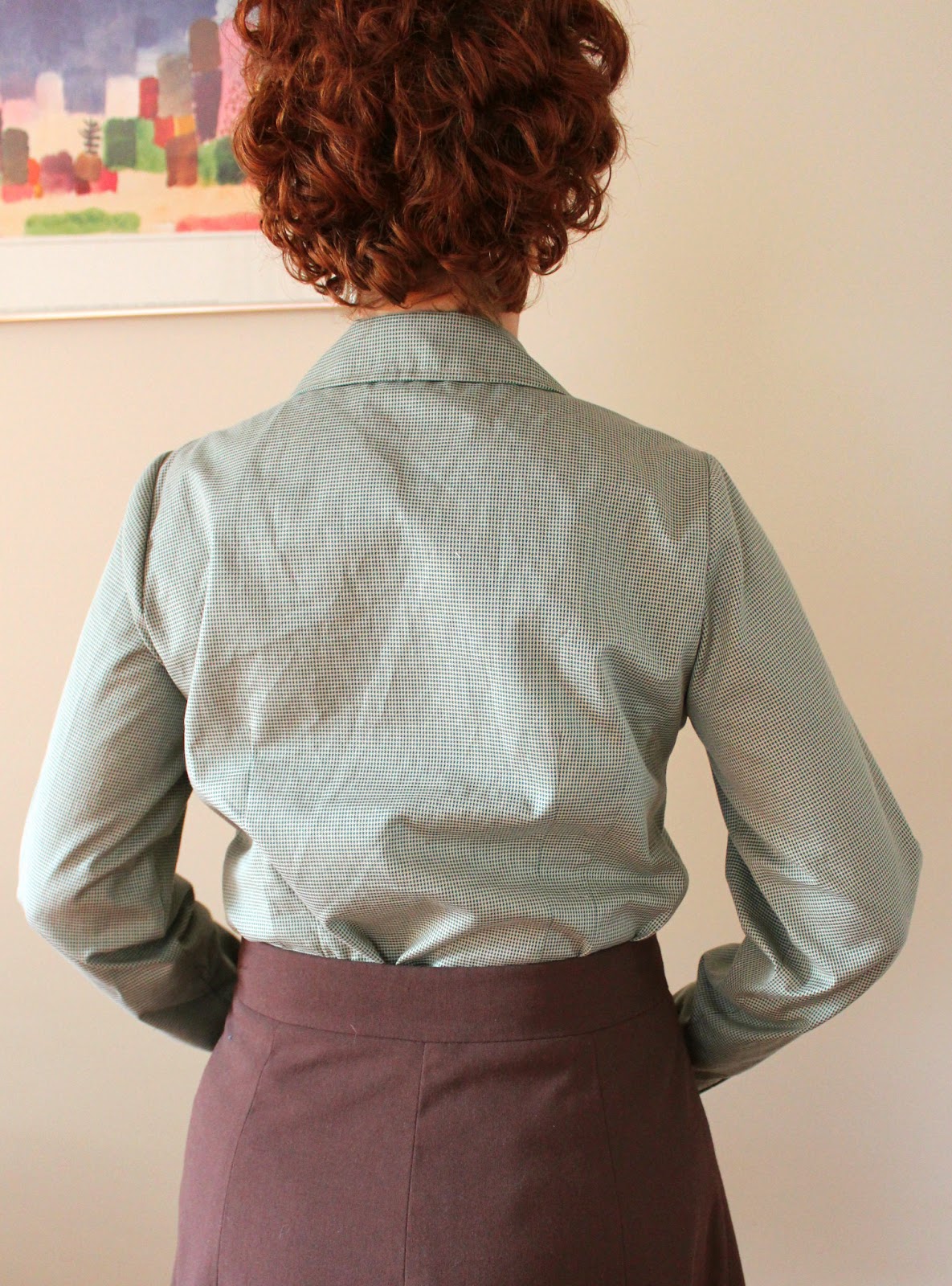 The blouse is quite roomy. I may have gone overboard in tapering out through the waist and hip area, but I wanted the blouse to have an easy fit. I'm all tucked in for these photos, just because that seemed to look right with the skirt (and because I was headed out dancing, and wanted everything to stay covered). I also plan to wear the shirt untucked with pants.

I scaled the collar down somewhat. It had quite a pointed, nineties shape, so I blunted the front collar edges by about 5/8". 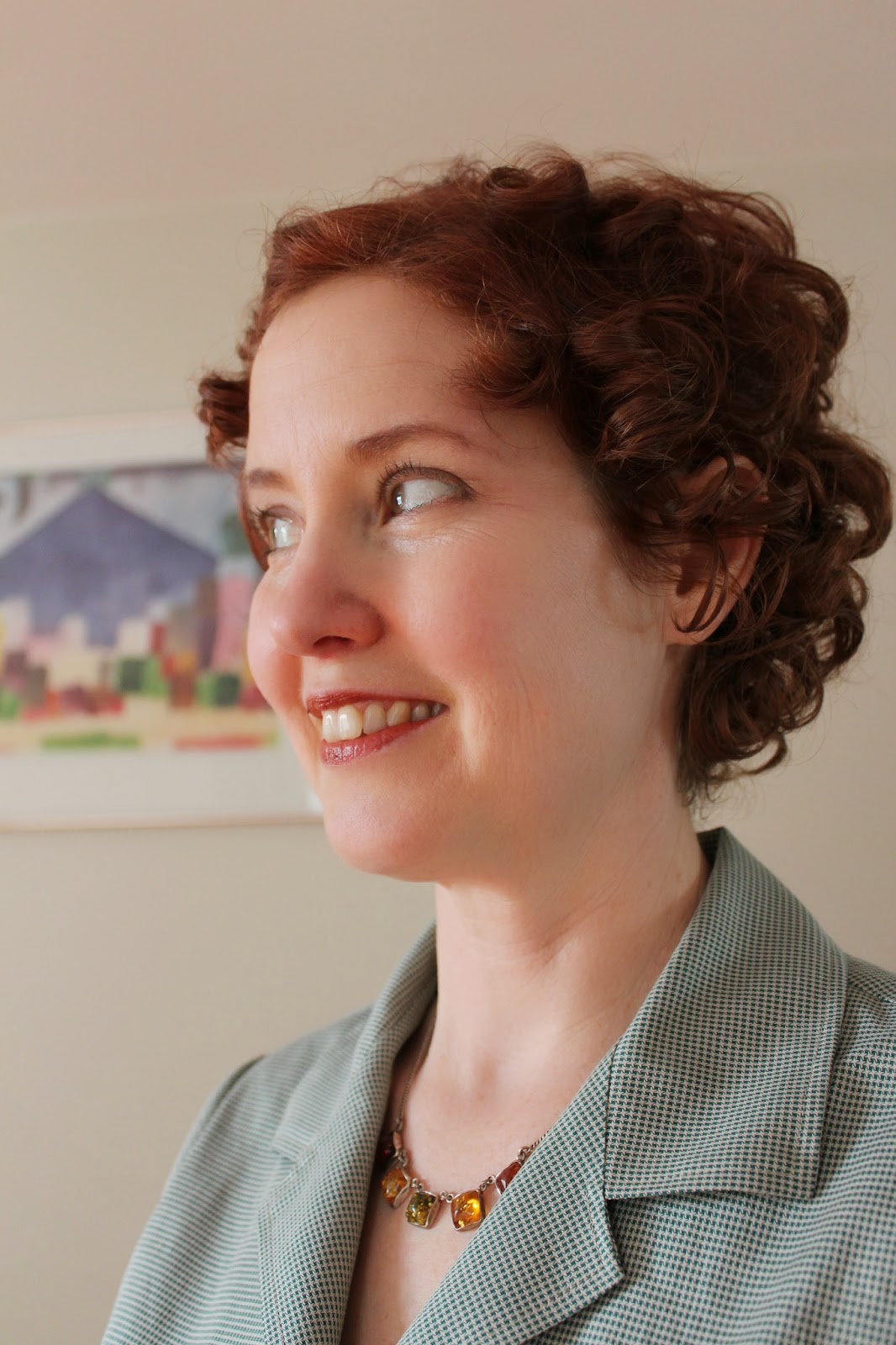 Trustingly, I didn't measure the sleeve armscye seam against the garment armhole seam and was subsequently disappointed to learn that the sleeves had a large amount of ease, far too much to set in smoothly. I still haven't gone back to alter the pattern, so I'm not sure of the exact amount of extra ease, but it may have been close to 3". I trimmed and basted and unstitched and trimmed and basted some more to get to a sleeve which could possibly be sewn into the armhole.

Next time, I will adjust the dart positions: the horizontal dart is too high and too long, and the two vertical darts need to be shortened at the top.

The fabric is a Burberry mini-houndstooth cotton shirting bought a couple of years ago from FabricMart. Back in the days when I spent actual money on buying clothing for my former professional wardrobe, I purchased a couple of Burberry shirts and their quality was amazing. I hope this shirt holds up as well as those (which are over 15 years old and still very wearable). I used silk organza as a sew-in interfacing on the collar, facings and cuffs. 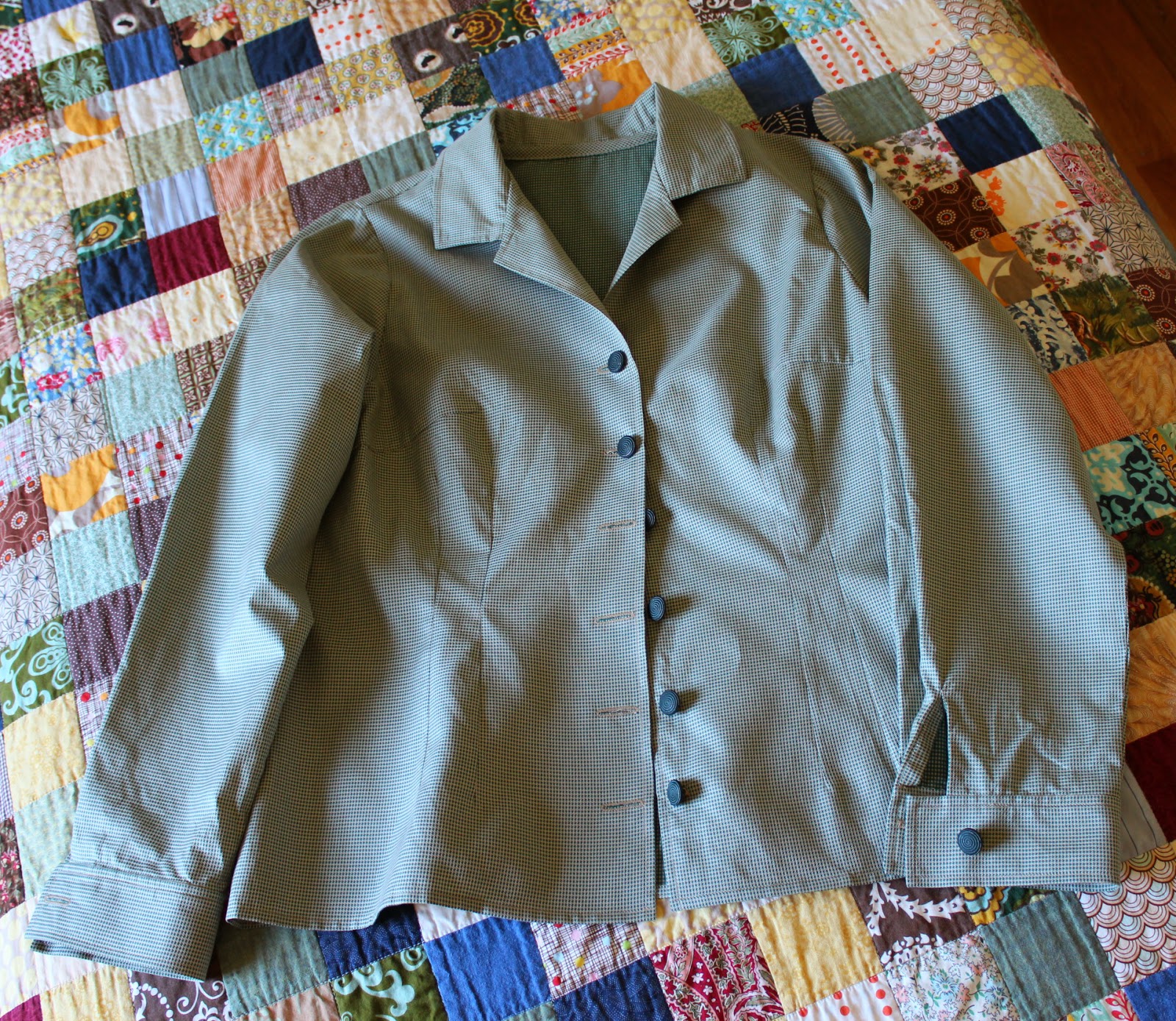 The trickiest part of sewing a convertible collar is finishing the back neck edge. I've taken to making a short bit of self-bias binding and applying it to the neck seam. This has worked better for me than the current pattern instruction standard procedure of staystitch the back section, clip, turn in, trim and then try to get it all to line up at the shoulder. 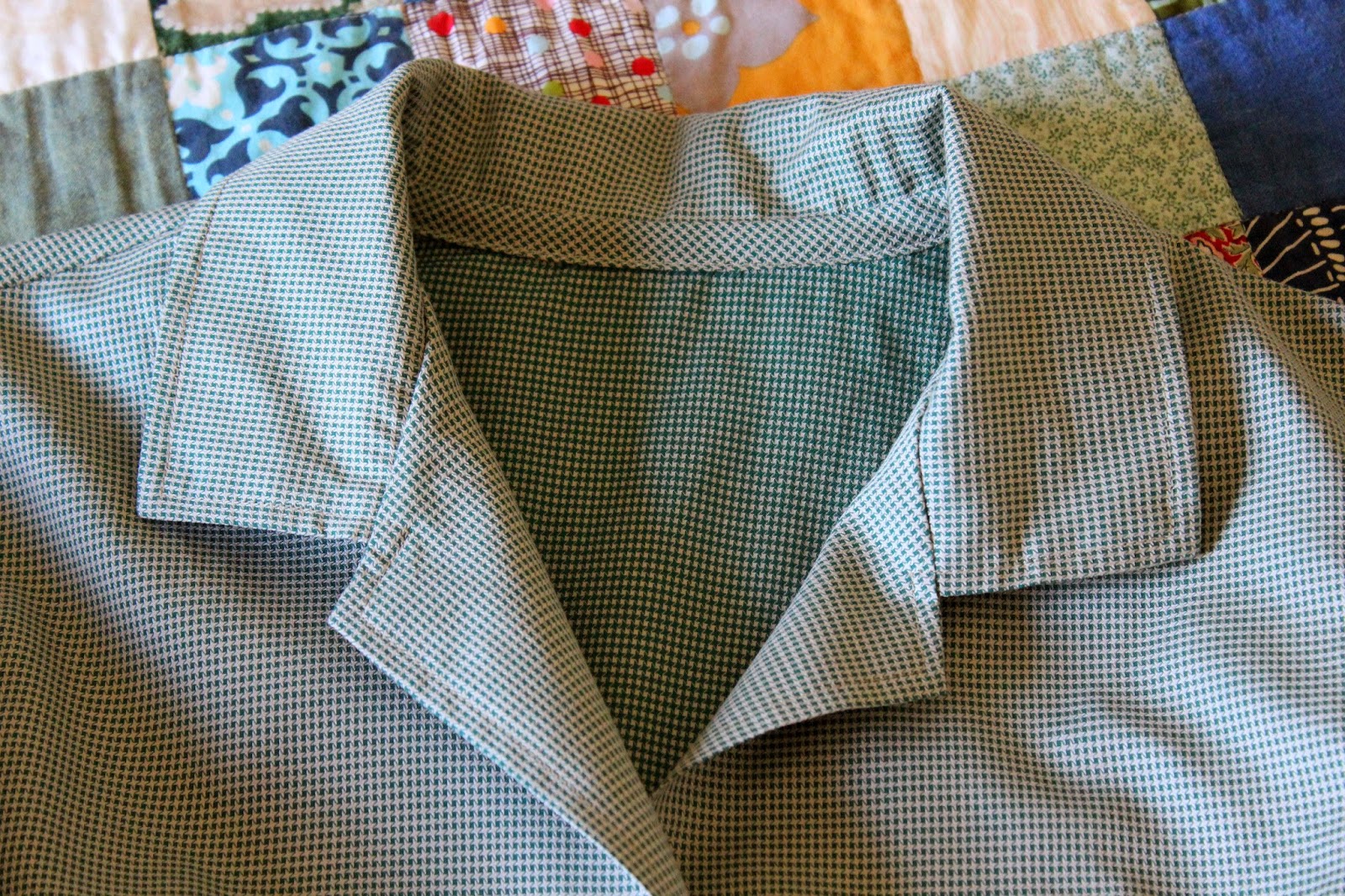 I had several button choices on hand and nearly went with a standard cream shirt button. But then I decided these green plastic buttons--which are probably about the same vintage as the 1996 pattern--from my stash would be a little kickier. I made the whole shirt on my vintage straight stitch Singer 201 (and modern Juki serger), so I used the Singer buttonhole attachment to make the buttonholes. They came out very nicely, though my choice of thread color wasn't too great. It was the best I had on hand. 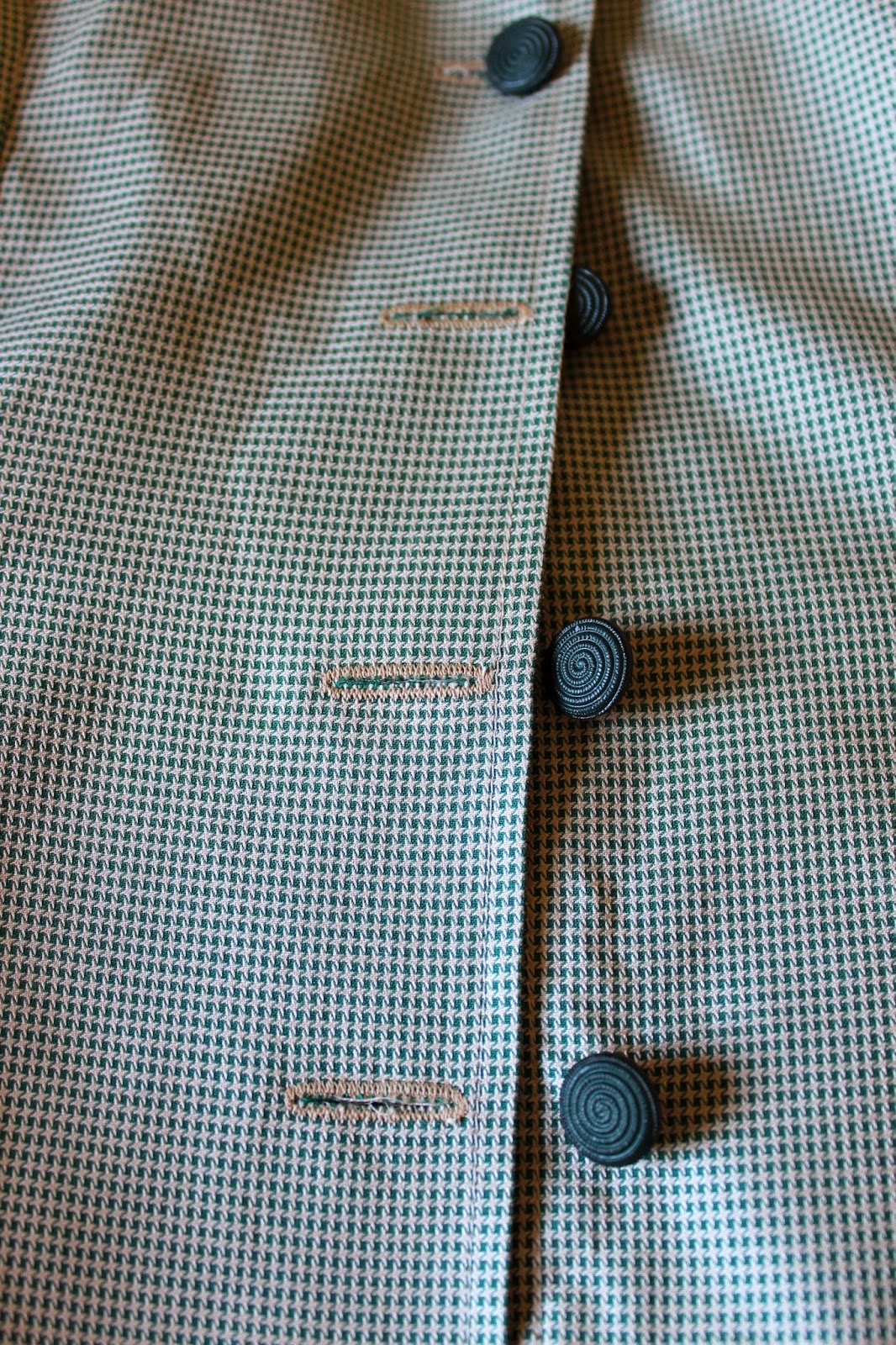 Posted by Virginia at A Sewing Life at 4:10 PM