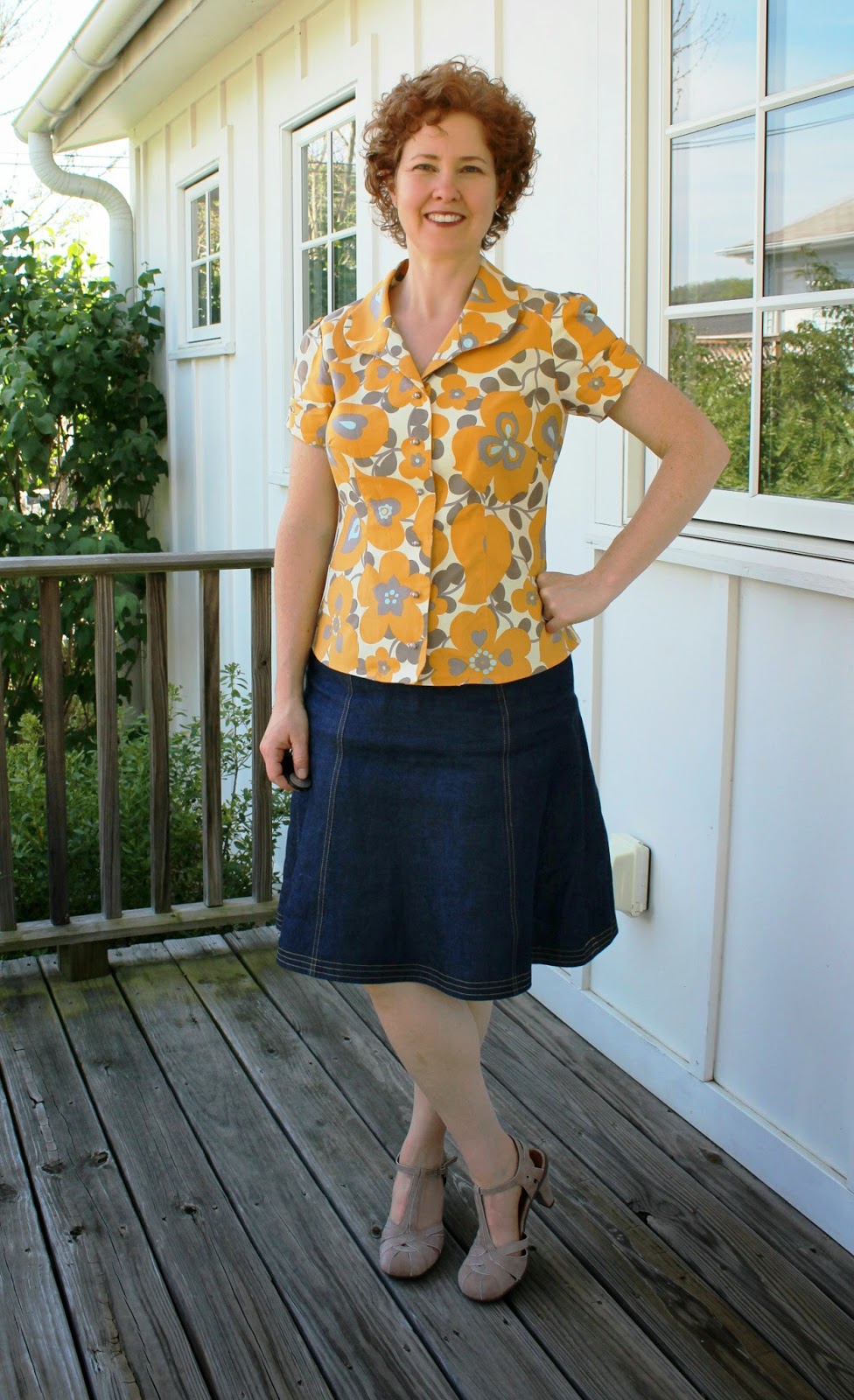 Sometime in the past year I discovered The Secondhand Years, the blog of irrepressible Curtise. Her knack is to use the slightly eccentric vintage clothes she favors as a sort of prism through which she looks at and thinks about life, children, work, friendship, happiness, motivation, expression...and whatever else might be on her mind. She has a talent for exploring trains of thought which are both very individual and idiosyncratic, but also relevant and thought-provoking to her readers. So it is exciting that she has taken up sewing (for the first time since high school) in the past month. Thinking about her new foray into sewing, I was reminded that some of my earlier creations were at least as successful as recent ones, despite my perception of having learned a few things along the way.

I can't find a blog record of it, but I made Simplicity 5914, view E, quite a few years ago--probably seven or eight years ago. It must have been pre-blog. Even then I didn't think of that skirt as particularly great. The fabric was a mid-weight stretch denim from Hancock's, and I remember that it retained some fold and fade lines from the bolt after pre-washing. At different body weights it fit, naturally, differently--higher or lower on the hip. But despite those differences, its simplicity and its less-than-noble fabric, I wore that skirt constantly until it was a real rag. 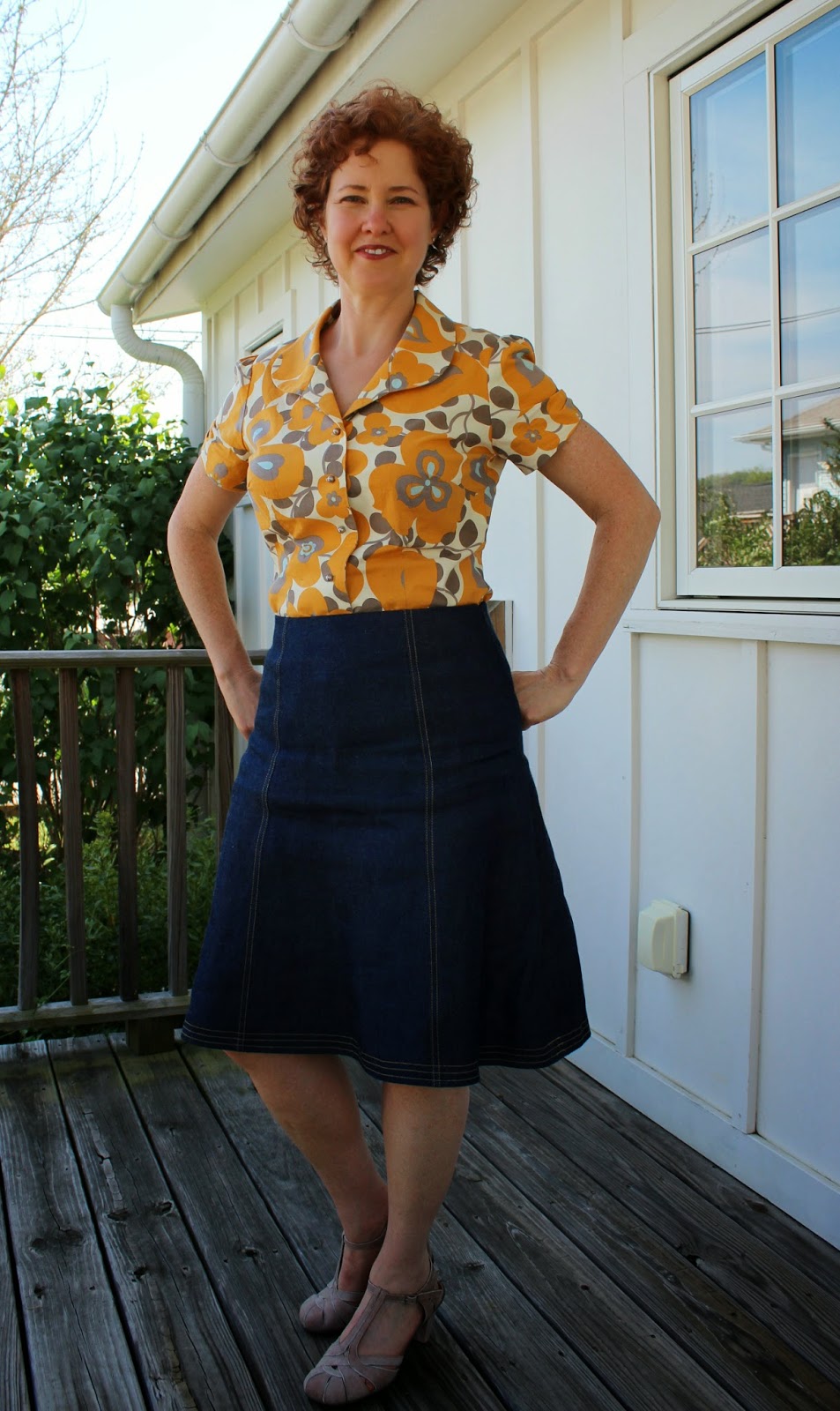 I always meant to go back and make another one, but every time I bought a piece of denim, I'd think, "Maybe I should make it like the old one, but with a front buttoning placket," or "This time with pockets--I'll love having pockets!" None of those skirts had the staying power or versatility of the original skirt. 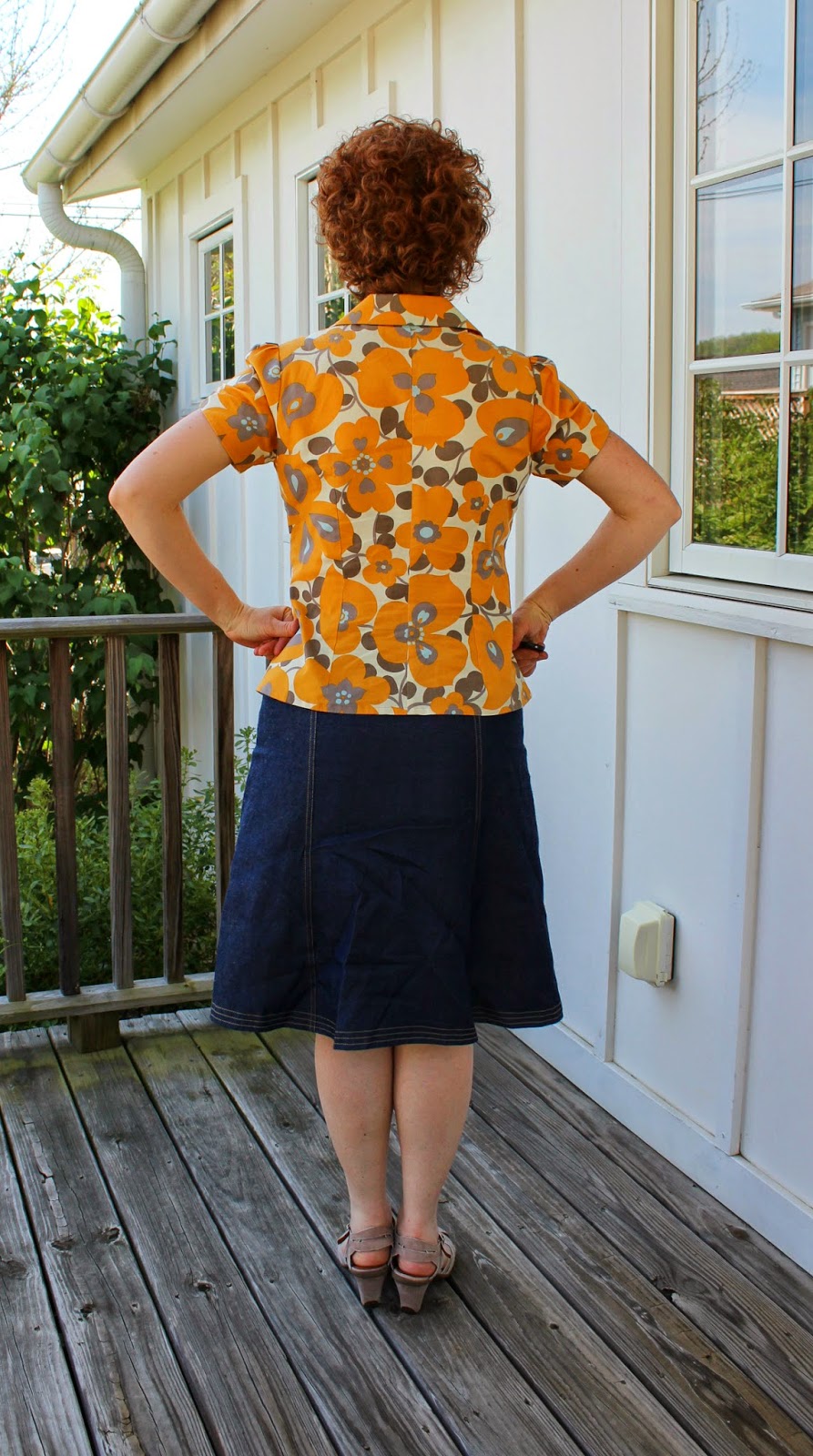 So this time I just made the same old skirt, already. The only difference is the fabric, a very nice heavy-but-drapy ramie denim from FabricMart (all but sold out as of this writing). 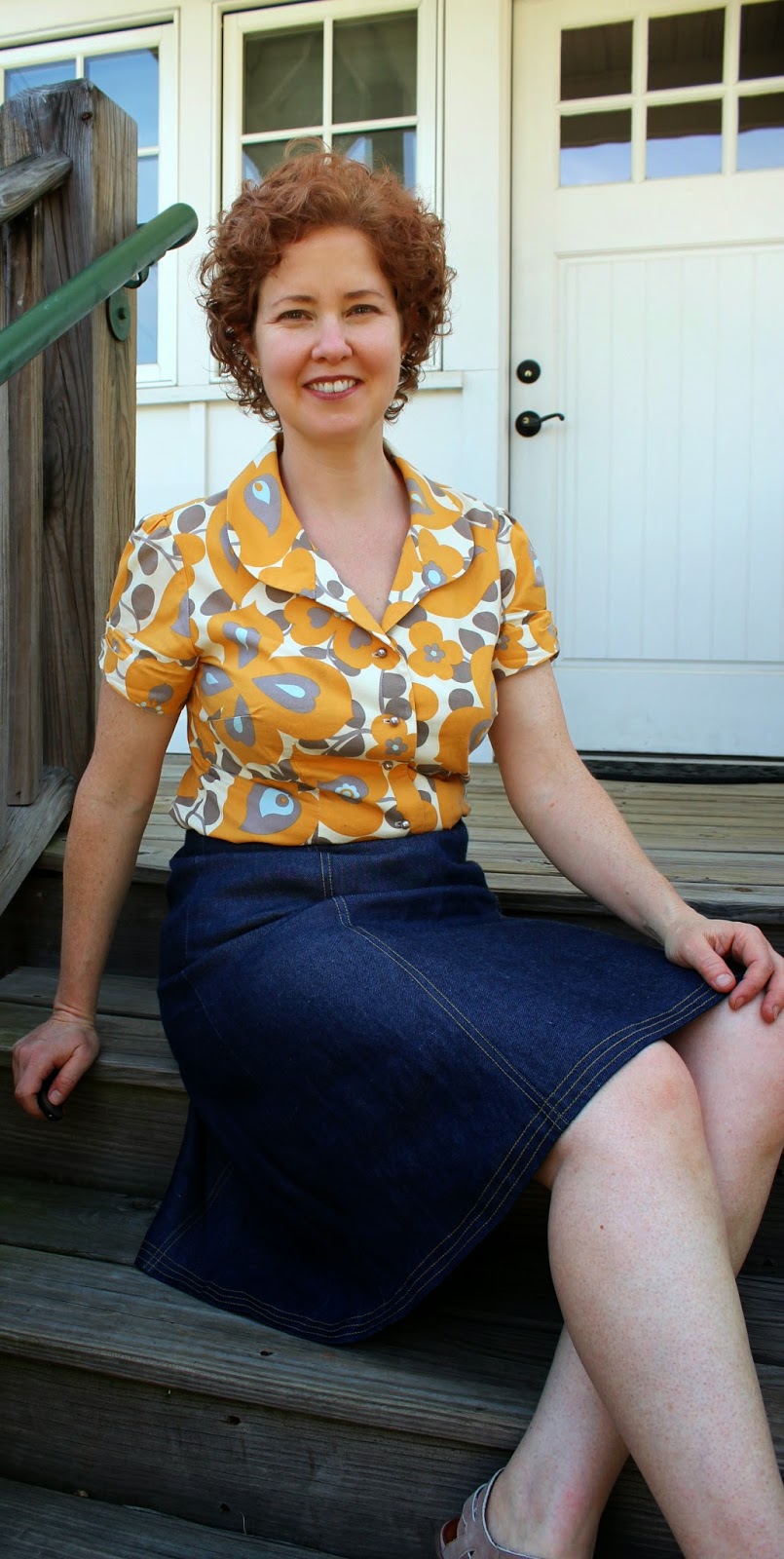 The front and back panel seams are sewn, serged, pressed to one side and topstitched twice, using two strands of regular sewing thread in the needle. The hem is turned up and has three rows of topstitching spaced 1/4" apart. 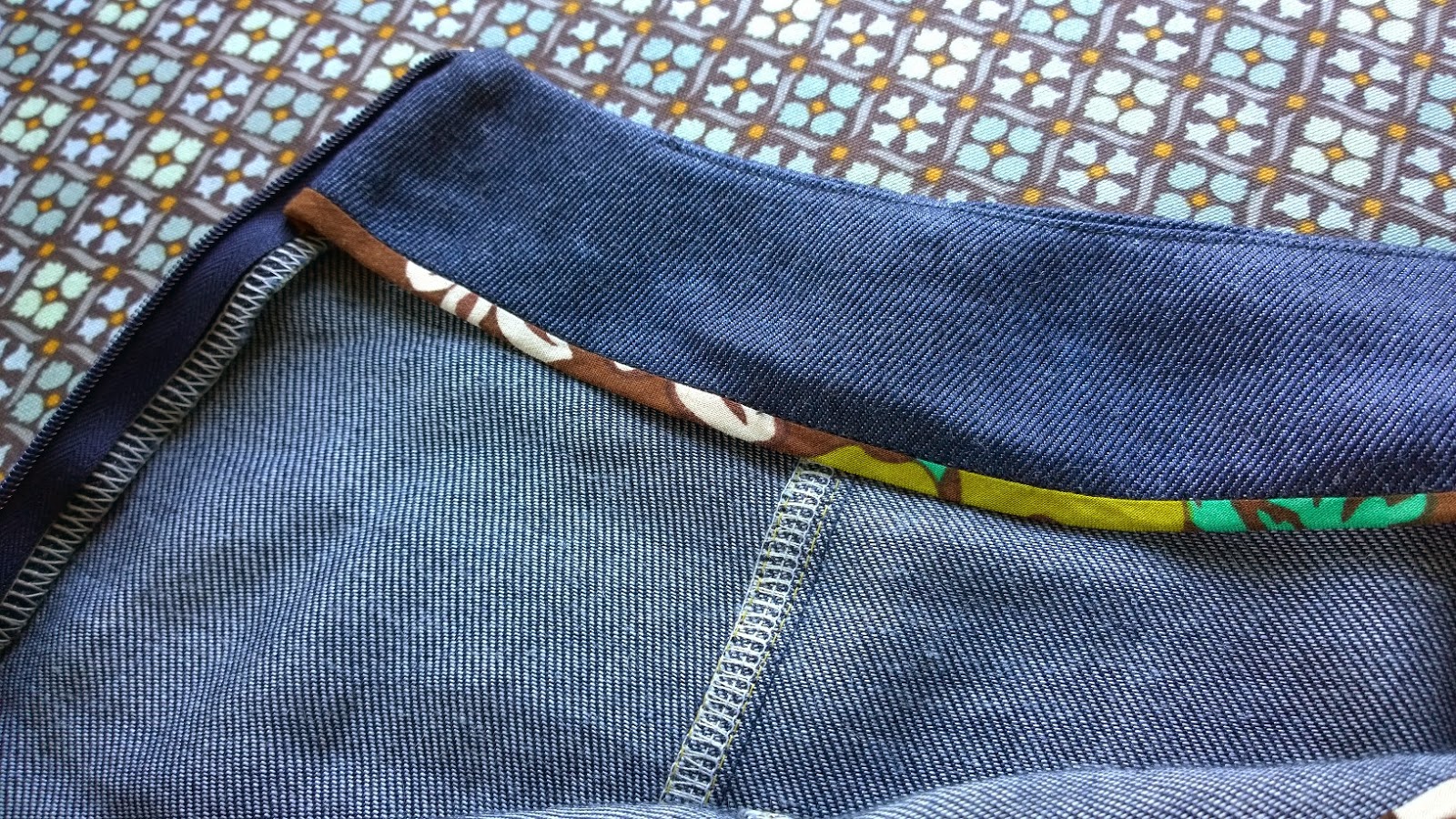 The waistband facing is trimmed with a strip of self-made rayon bias binding left over from another project. To help this skirt fit smoothly at the waist in the back (where my skirts have a tendency to bunch up due to swayback plus large bottom), I cut the skirt waistline 3/4" lower at the center, tapering to the original seamline at the sides. This worked well to make the skirt fit more smoothly.

I've decided that a side zipper suits me best. A center back zipper pokes me in the spine when I sit because of the swayback issue. This skirt is designed with a side zipper, so no changes there. 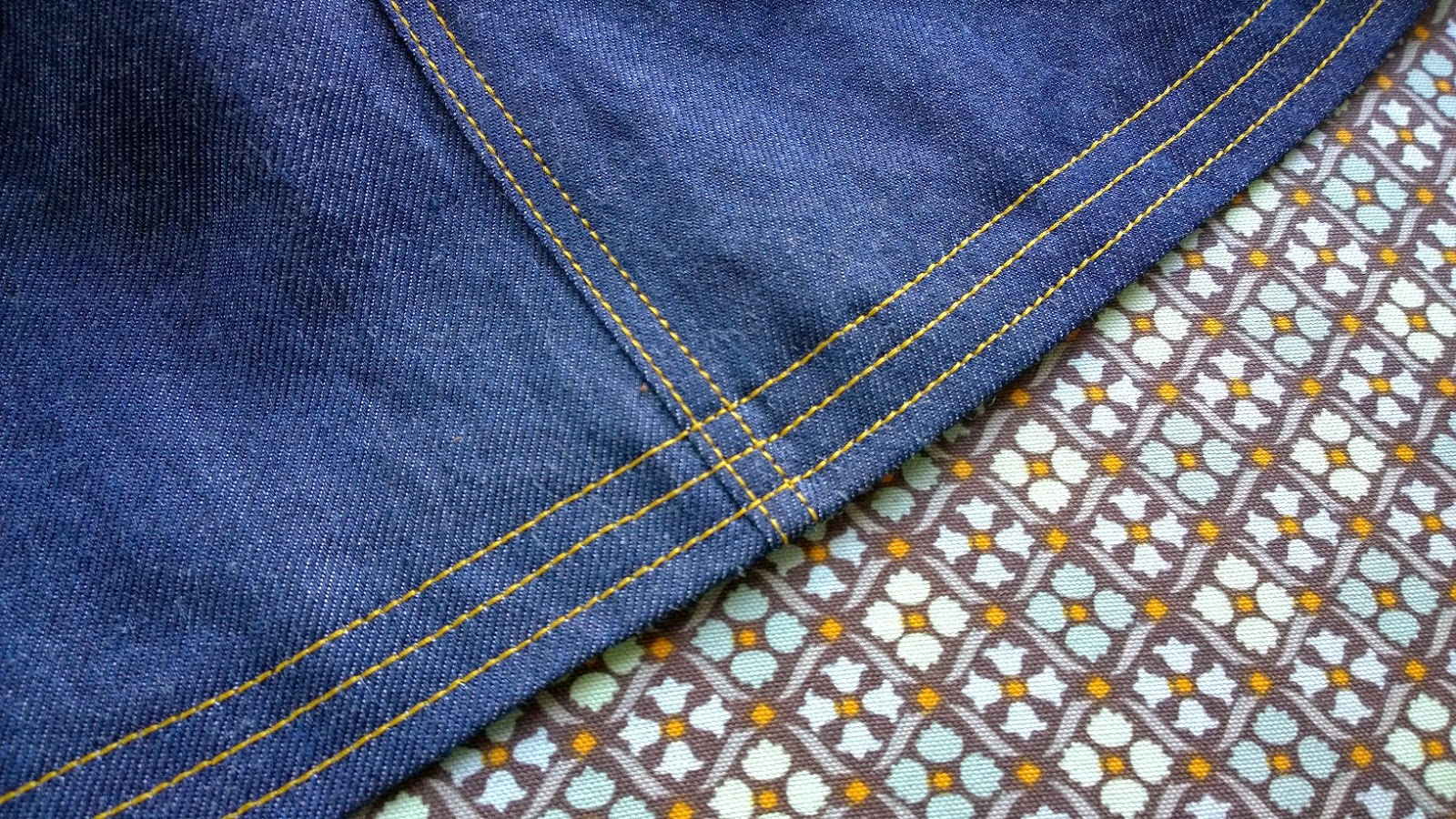 The triple topstitching at the hem was easy enough to do, but I have one tip: start with the line of stitching closest to the bottom of the hem and then move to the next and finally the top line of stitching. Because of the flare of the skirt, there is a little bit of ease at the upper edge of the hem, which would throw off your results if you stitched that line first.

Time will tell whether this skirt will have the magical rightness of its predecessor, but early signs are good. Maybe with the example of Curtise and her new sewing hobby before me, I can be more aware of those earlier instincts and impulses that worked out well in my sewing.

Have you ever realized that your oldies were decidedly goodies?

Posted by Virginia at A Sewing Life at 9:20 AM