A Gone and Golden Machine 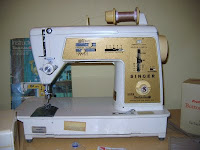 Last week I brought home a snazzy Singer sewing machine cabinet from the fifties. Dark wood, those nifty tapered legs that end in a brass ring, that kind of thing. Within, a sewing machine. What would be my fifth sewing machine. After recently selling two. And buying two more.
This sewing machine, I discovered in my hasty internet research, is not revered. The Singer Touch & Sew series is also known as the "Touch & Swear" mostly, it seems from what I read, for its finicky horizontal bobbin. Fiddling with the machine, I had the impression that Singer's marketing strategy for this series must have been to load it up with so many features that the argument could plausibly be made that the customer's trusty older Singer was completely out of date.
But...but. I liked it. I really did. And some other folks do too. I found an online service manual and managed to actually rebuild the tension mechanism. I was all set to start in on the switch selector mechanism and then, well, then another sewing machine arrived. You can see a glimpse up in my banner, but I will have more to say about that machine soon. So I just decided to list the machine on Craigslist for $25 and hope that some nice person would enjoy it.
And I think that's what has happened. Kelcey called. Her $100 new Singer broke a year after purchase. She wanted a sturdy vintage machine for simple projects. She has a toddler daughter and another on the way.
If you are interested in knowing more about this series, here are some of its features: a chainstitch capability (used for basting and decorative work, I'm told), special stitch cams, a foot control with a sliding speed control lever, a basting cam that makes stitches up to 1/2" long, a buttonholer and of course the range of Singer slant shank presser feet. As with many vintage machines, there is a whimsical nature to the prices they sell for on eBay. I saw a very similar outfit go for $45/$35 shipping yesterday. I also saw a beautifully-presented 600E go for $250 a month ago.
I hope the Singer 640 will be a golden machine for her. It makes me glad to think that it has a new life with a new young family.
Posted by Virginia at A Sewing Life at 6:24 PM