A Winning Alteration of Simplicity 1882

Back in April, I was telling you about Simplicity 1882. This cute dress was made last year, hemmed this spring and unworn until last week. Why? Self-deception aside, it was just too tight for physical or psychological comfort. 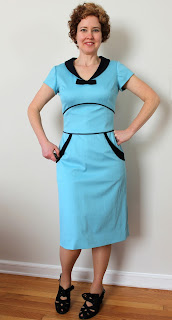 In my earlier post, I joked about waiting for a middle-aged mommy vintage pinup contest to launch this dress and, if you can even believe it, something rather like that finally came along. My local swing dance community, Swing Asheville announced a friendly contest to encourage dancers to dress up last week. Since I "dress" for the dances every week, I needed a little extra sumpin' for the contest, and what better thing  than this dress?

Even though I had said it would be easier to lose weight than to make myself remove that piping around the midriff, what I actually did was to gain a few pounds. Yikes! And even before the gaining, the invisible zipper felt very stressed, especially where it crossed the piping. Somehow the prospect of bursting out of my dress mid-dance did not appeal.

With the specter of public embarrassment as my motivator, I managed to force myself to rip all those carefully matched seams apart. Though I initially intended to make new piping (the old was now too short) and restore it with the alteration, in the end I decided that I would just as soon not emphasize my midriff area quite so much. Leaving out the piping makes the dress less appealing on the hanger but probably more flattering to wear, especially for a middle-aged mommy. And it certainly makes the zipper operate more smoothly. 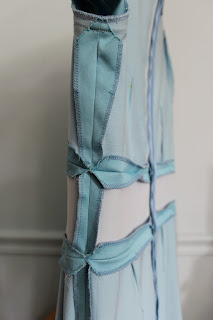 Those 1" wide side seam allowances  provided with the Simplicity Amazing Fit patterns came in very handy! You can see that there was a limit to how much I could let out due to the previous trimming at the seam intersections. Fortunately, there was enough untrimmed width to get the extra room I needed. The side seams were released up to the armhole and down to a few inches above the hem. 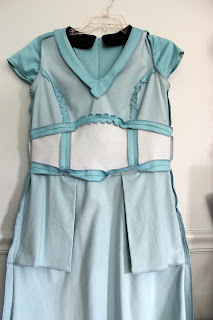 I'm sorry I don't have any pictures of me wearing the altered dress, but I can tell you it did receive many compliments and, most importantly, a prize! Well, the prize was that little flower you see clipped to the lapel. Perhaps not such a rich reward for all the work that went into making and altering the dress, but of course being able to finally wear the dress is its own reward. 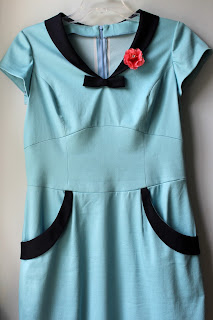 After all of that, it's now extremely comfortable. Perfect for swingouts, swivels and Charleston. Clothes intended for Lindy Hop must allow for a full range of movement and they must definitely be washable. Those requirements will keep me honest in my sewing from now on!
Posted by Virginia at A Sewing Life at 1:41 PM